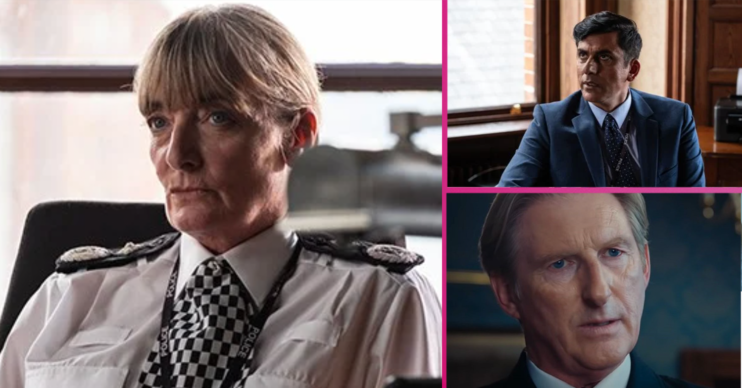 Line of Duty: Who is H? All the suspects past and present!

Hastings and Kate are still in the frame

Line of Duty season 6 is here along with the enduring big mystery: who of the remaining suspects is H? As we get stuck into the new series, here’s a recap of all the suspects.

We know that Steve Arnott had the flash of inspiration that the dying Dot Cottan’s busy fingers were pointing out there were FOUR people working as “H”.

And only three have been caught to date, so there is still one villain at large: the uber lord  – or lady – of the corruption ring.

So who is H? Let’s look at who is still in the frame – and all those suspects that came before…

Who is H – suspects past and present!

We first met the murder squad boss when he questioned Steve following the gruesome death of Georgia Trotman.

He was clearly one of the rotten apples – his visits to a brothel that enslaved underage prostitutes allowed the OCG to blackmail him.

But H continued at large after Hargreaves’ fatal shooting at the Eastfield Depot raid, showing that he could not have been the top dog pulling the strings.

As a young boy, Matthew ‘Dot’ Cottan used to carry golf bags for gangster Tommy Hunter, earning him the codename The Caddy. He arranged a hit in series two to finish off Hunter to protect his own identity, and then was assigned to AC-12 permanently.

He killed Lindsay Denton, he framed Steve Arnott, and he was finally shot dead while trying to flee, although he took a bullet meant for Kate Fleming.

But, as he tried to name H in his dying declaration, he was not the top boss.

At one stage the sultry Gill, she of the big hair and slinky outfits, was the bookies’ favourite of the suspects for who is H.

Not only had she manipulated Ted Hastings, she placed John Corbett undercover and she had the ‘urgent exit required’ text on her burner.

But as the Gaffer pointed out, she wasn’t as important as she thought as she was, as the OCG left her to be stabbed by PC Tranter, before she was assigned a new identity.

He placed Dot in AC-12 and he was responsible for blackmailing tragic Maneet Bhindra for inside information. But his dodgy dealings came to an end when, in her final interrogation, Roz Huntley took him down.

She revealed he ordered the attack on Steve – leading to his desperate break-out.

But his liberty was short lived and he was found dead at the jetty favoured by the OCG for disposing of their victims.

“Do you still believe there’s a fourth man out there?” asks AC-12 new recruit Chloe Bishop (Shalom Brune-Franklin) in the trailer for season six.

Steve replies: “Man, or woman,” with a significant pause before the camera pans to a close-up of a decidedly shifty looking Kate.

So could Undercover Queen DI Fleming be the one after all, who has been pulling the wool over AC-12’s eyes and betraying her colleagues all along?

Sindwhani is one of the police’s few elected officials – declaring he got his post on a promise to ‘shake things up’ and expose police corruption.

He appointed Gill Biggeloe as his senior legal counsel (a red flag if ever there was one).

Sindwhani was last seen at a press conference declaring there is no institutional corruption within the force – which at least shows he is willing to be economical with the truth in pursuing his own ambitions.

Featured in the trailers for season six, he is definitely one to watch!

In series five, Wise was slow to assist AC-12 and only gave them access to Operation Pear Tree (the undercover placement of John Corbett) after Rohan Sindwhani pressured her.

Later, she ordered the removal of AC-12 from the investigation into Hastings. Was this a ruse to throw them off the scent, and could she be the guilty party?

The steely AC-3 boss was ruthlessly determined to prove Ted Hastings was H – although, Kate and Steve rode to the Gaffer’s rescue and her case completely fell apart.

But was her desire to bring down Hastings motivated by something more sinister?

Certainly she did not seem keen to pursue the line of questioning against Gill and would have been well placed to give the order to PC Tranter to stab Gill in the toilets.

But then of course, what you might call the million dollar question. Has Ted ‘The Gaffer’ Hastings really been ruled out?

And didn’t we see a line of suspicious type popping up on his laptop – like that used to communicate with the OCG? And let’s not forget his incriminating misspelling of ‘definitely’!

Could it be the ultimate double bluff that the top game keeper has been a poacher all along? Is Hastings actually H?

Leave us a comment on our Facebook page @EntertainmentDailyFix and let us know who you think is H in Line of Duty.