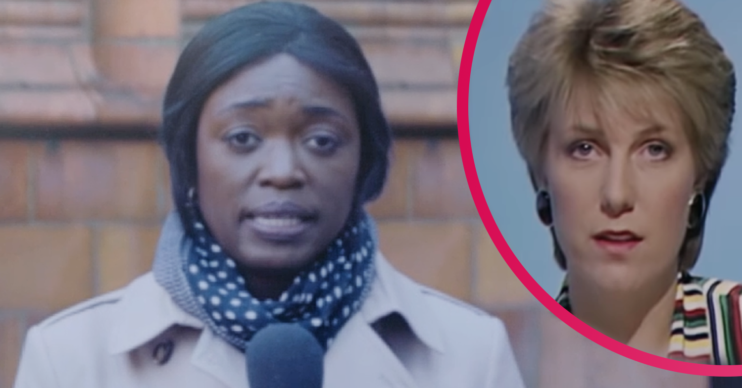 Line Of Duty fans are convinced that series six’s central storyline has parallels with the murder of Jill Dando.

And as new information about murdered character Gail Vella emerged, fans couldn’t help but draw comparisons between the two cases.

Why do Line Of Duty viewers think there are parallels between Gail Vella and Jill Dando?

AC-12 trio Ted Hastings, Steve Arnott and Chloe Bishop sat down to look at some of the footage from Gail Vella’s TV reports.

Now, Jo Davidson’s Operation Lighthouse investigation into her killing was under scrutiny.

Hastings, Arnott and Bishop watched on as Gail reported on cases of corruption inside the police force.

This included cases AC-12 had worked on in the past.

One of them was the investigation into Patrick Fairbank, an ex-Chief Superintendant, and councillor Dale Roach.

Both of those men were part of a paedophile ring, and both were eventually jailed.

They also had links with real-life predator, Jimmy Savile.

Storyline has similarities with the tragic death of Jill Dando #LineOfDuty

As events unfolded and the nature of Gail Vella’s reports became clear, fans took to Twitter to air their theories.

One viewer wrote: “Is it just me…

“…but more than a few parallels in that opening episode to the Jill Dando murder and subsequent investigation?”

Anybody else getting the links from the storyline to Jill Dando murder?

Another said: “Anybody else getting the links from the storyline to Jill Dando murder?

A third commented: “Looking like they are ever so gently basing this season on the murder of Jill Dando.”

What happened to Jill Dando?

Shot in the head on the doorstep of her home, Jill’s death shocked and horrified fans and the showbusiness world.

Local man Barry George spent seven years in jail after being charged with her murder before his conviction was overturned.

The murder is still unsolved today.

However, many speculate that Jill and Crimewatch were investigating an alleged paedophile ring within the BBC.