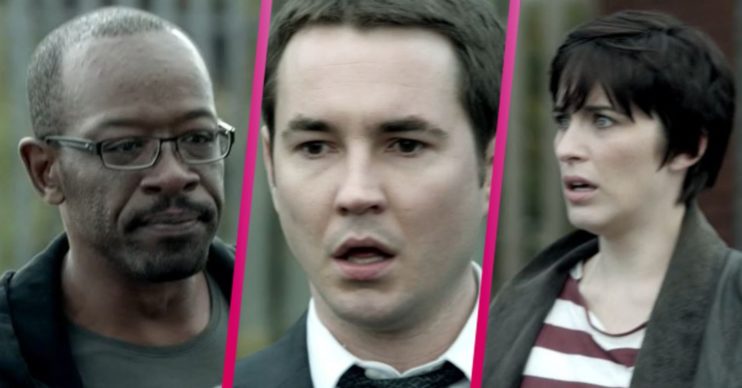 Line Of Duty series one ending shocks fans all over again

Viewers called it 'brilliant' and 'spectacular'

Line Of Duty series one’s ending had fans in awe all over again last night.

The current rerun of the BBC cop drama came to a “spectacular” conclusion on Monday (August 17) evening and left viewers needing time to recover.

What happens during the ending of Line Of Duty series one?

DCI Gates’ (Lennie James) involvement with the the Organised Crime Group was exposed.

Eventually backed into a corner, he agreed to help his fellow coppers nab gangster Tommy Hunter, for whom Jackie Laverty – the woman Gates was having an affair with – had been laundering money.

Even though he helped them, Gates knew his career was over. To ensure his family got his pension and benefits – which would have been taken away, had his dodgy dealings come to light – he took his own life, making it look like an accident.

Towards the end of the series one finale, once they had Hunter in hand, DS Steve Arnott (Martin Compston) advised Gates to run.

“Run where?” he demanded.

Steve insisted: “It’s over, we got him!”

But Gates, seeing no way out for himself, said: “My wife and my girls get nothing unless this is in the line of duty. That’s what you owe me! This and nothing else. Do you understand? It’s for my family.

The ending of series one is truly spectacular.

With that, DS Steve Arnott and DI Kate Fleming (Vicky McClure) looked on, horrified, as Gates ran to the road and turned to face them – before putting himself in the path of a huge lorry, which killed him.

Another wrote: “I’ve seen series one of #LineofDuty three times now and the ending with Lennie James never fails to shock me.”

A third said, ahead of it airing: “Think I’m going to need at least a week to recover before series two after that ending #LineofDuty.”

“I had forgotten that series one had such a dramatic ending,” wrote a fourth, adding: “Brilliant stuff #LineofDuty.”

Someone else said: “Utterly brilliant rewatching #LineofDuty series one. Lennie James was phenomenal as Gates, the only character that AC-12 have chased that I’ve ever felt sorry for. And the ending gets me every time!”

“Now that was an ending!” said a sixth. “Great to be able to fit the pieces together again.”

Another tweeted: “The ending of series one is truly spectacular. No matter how many times I watch it, have to feel for Gates #LineofDuty.”

Now that was an ending! #DramaAlert #LineofDuty Great to be able to fit the pieces together again 😁 Series 2 incoming!!!

The ending of series 1 is truly spectacular. No matter how many times I watch it, have to feel for Gates #LineofDuty

What do you think of the end to series one? Leave us a comment on our Facebook page @EntertainmentDailyFix and let us know.