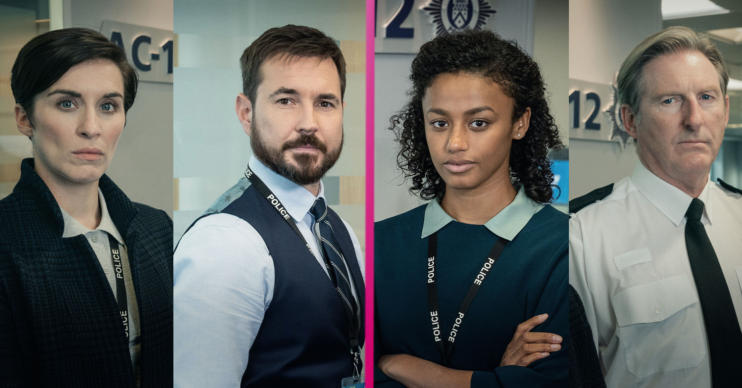 Line Of Duty series 6 will look a little different, the BBC has confirmed.

And it has been revealed that, this time around, we’ll be getting an extra episode – much to the delight of Line Of Duty fans.

The BBC has also shared a new teaser glimpse of the show’s cast today (February 3).

In it, Vicky McClure, Martin Compston and Adrian are joined by newcomer Shalom Brune-Franklin, who plays DC Chloe Bishop.

What has the BBC said about Line Of Duty series 6?

This time around, instead of the usual six episodes, series 6 will feature seven.

The news was announced by stars of the show Adrian Dunbar and the hunky Martin Compston.

7 episodes instead of 6?! Mother of God!

They can be seen in character as Detective Inspector Ted Hastings and DS Steve Arnott.

The pair are seen chatting about a mysterious character called Vella.

However, as the scene progresses, it appears it’s just a spoof.

The tweet read: “Listen up, fellas. When the gaffer asks for more, you better deliver.

“#LineOfDuty returns for Series 6 with an extra episode (7 instead of 6).

“Coming soon to @BBCOne and @BBCiPlayer.”

Read more: Where have we seen Line Of Duty newcomer Shalom Brune-Franklin before?

In the video, Steve Arnott says: “Regardless of the personal involved, Valla’s still the highest-profile inquiry engaging this force.”

“I’m going to need a hell of a lot more before I can organise a formal inquiry,” Hastings replies.

“How about an extra episode, gaffer?” comes the reply, to which Hastings smiles and nods.

Listen up, fellas. When the gaffer asks for more, you better deliver.#LineOfDuty returns for Series 6 with an extra episode (7 instead of 6). Coming soon to @BBCOne and @BBCiPlayer. pic.twitter.com/oQ7g9oMVYe

What did Line Of Duty fans say about the news?

Line Of Duty fans were thrilled at the series 6 change.

“7 episodes instead of 6?! Mother of God!” exclaimed one fan of the show, using a Hastings catchphrase.

“Finally something to look forward to,” another commented.

“How exciting!” declared another.

“Yes gaffer, that will do nicely,” said another.

Where have we seen Shalom Brune-Franklin before?

If the new Line Of Duty character looks familiar, that’s because she is!

Shalom has previously starred in Our Girl and Roadkill.

Head to our Facebook page @EntertainmentDailyFix and tell us if you’re excited for series 6 of Line Of Duty.