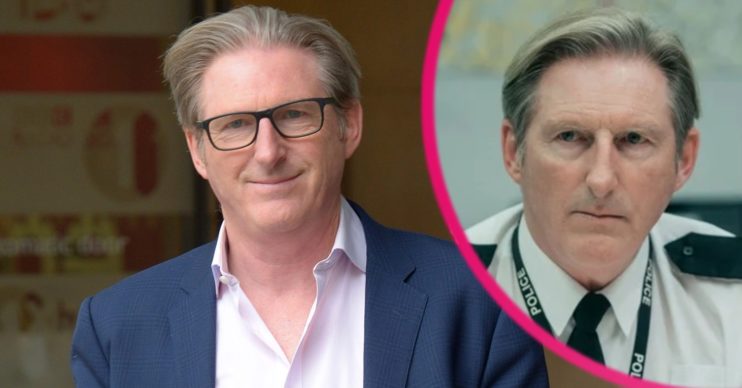 The 62-year-old Irish actor returns to the popular BBC crime drama alongside Martin Compston and Vicky McLure on Sunday March 21.

Ahead of the highly anticipated episode, Adrian shared his thoughts on writer Jed Mercurio.

Line of Duty season six: What did Adrian Dunbar say?

Speaking to The Sun, the star explained he does not know who criminal mastermind ‘H’ is.

He said: “Jed does not let us know, does he? Who knows?

If Jed wants to, he could just throw me out of a window

“The twists and turns of Jed’s mind . . . anybody could be. In the latest trailer, the finger is pointing in all different directions that you would not have imagined.”

Furthermore, Adrian went on to joke that Jed has “control of his life”.

In addition, he shared: “If Jed wants to, he could just throw me out of a window. So consequently we are all really nice to Jed. He is our best mate.”

What happens in the show’s trailer?

Meanwhile, earlier this week, fans were treated to an exciting preview of the upcoming season.

The fast-and-furious trailer, which lasts for one minute and 11 seconds, reveals new plot details fans can look forward to.

She says about the journalist: “Her life cut short… and whoever did it has got away with it.”

Since then, eagle-eyed viewers have discovered a trail of Easter eggs stemming from the show’s new trailer.