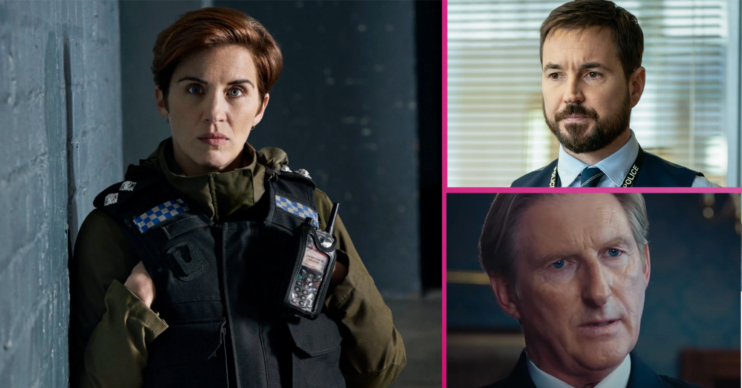 Line of Duty season 6 has landed which means Kate, Steve and Ted are back – but beyond AC-12, what do we know about their personal lives?

The first rule of TV cop shows states that behind every officer is a complicated personal life.

And in five frenetic series we’ve been given some fascinating glimpses into what goes on when AC-12’s Kate, Steve and Ted are, er, off the line of duty.

First up – the Gaffer. It became clear in series two that, after 37 years, all was not well in Ted Hastings’ marriage.

His wife Roisin joined Belfast-born Ted as he wined and dined his new recruits – Steve and Georgia (Jessica Raine) – only for the atmosphere to turn very frosty.

Ted, we discovered, was in the dog house after losing their savings and then some in a dodgy property scheme in his native Ireland.

With the family home sold, Roisin was in a grotty flat (where she was attacked by John Corbett in series five).

But, as a devout Catholic, Ted believes marriage is for  life and his heart’s desire is to win Roisin back.

In series four, the Superintendent resisted the charms of lecherous lawyer Gill Biggeloe (Polly Walker), although he wasn’t above sneaking a peek at her curves as she sashayed past in her pencil skirt.

In a poignant moment, Ted admitted to Steve, “We married at 18… it was only ever her,” but Roisin dropped the bombshell that she has met someone else.

She broke his heart with the zinger: “You want a better future. You have it. I’ve found mine.”

Then in series two he and Georgia Trotmann got together the very night before her unfortunate early exit through the hospital window!

Steve was upset, but not enough to stop him getting off with the nurse who witnessed the attack, and the incriminating photos of them were later used against him by Lindsay Denton, (Keeley Hawes).

She was later, of course, the subject of his most infamous entanglement. Indeed when Carmichael (Anna Maxwell Martin) pointed out his habit of ‘shagging witnesses and suspects’ he doesn’t really have a leg to stand on (even before balaclava man put him in a wheelchair).

Of course, he has a penchant for fellow officers too. As well as Georgia  and Lindsay, there was a  romance with DI Nicola ‘Jolly’ Rogerson.

What happened with Steve Arnott and ex Sam Railston?

It was Murder Squad detective Sam Railston (Aisha Hart) who stole his heart, though. Series three found them celebrating their first anniversary, and Steve declaring ‘I only want to be with you’.

But when he was framed as the Caddy and arrested, Sam dumped him… their later attempt to rekindle their flame fell flat, leaving Steve, the former notorious swordsman, unable to rise to the occasion.

And he was popping painkillers like they’re Smarties… a sign of trouble to come in Line of Duty season six.

As for Kate, she first appeared to be that rarest of beasts – a happily married copper. But it was soon revealed that her relationship with IT boffin Mark, with whom she shares young son Josh, couldn’t be all that.

She was playing away with Richard Akers, the husband of Jayne, her best buddy from police training college.

After Jayne was murdered in the series two ambush, Kate asked to be taken off her friend’s case.

But she had no such scruples about keeping off her husband. Although she was still officially with Mark, before long the stresses of undercover took their toll.

Kate ended up kipping in her car and on one occasion drunkenly banged on the door, after Mark changed the locks, before being scooped up by Steve, who took her back to his to sleep it off on the sofa.

In series three Kate narrowly avoided an involvement with ‘Dot’ Cottan, who proved his affection was genuine by ultimately taking a bullet for her.

Kate Fleming and her son

And tongues wagged about Kate’s domestic woes. “You’ve got a son you barely see,” taunted Roz Huntley, (Thandie Newton) – who barely qualifies as mother of the year herself – in series four.

But by series five, Kate told Steve, “Me and Mark are making a go of things and I can be a proper mum. Your turn next… to settle down..” (Hmm.. we’ll believe that when we see it.)

But Kate can’t resist giving her all to AC-12 and was stung when John Corbett’s wife spat, “Undercover, it’s the perfect job for selfish arseholes.”

Series five finished with signs that trouble is in store with Mark querying why, with a promotion under her belt, Kate wasn’t spending more time at home.

With seriously exciting things expected for series six, expect him to be disappointed.

Leave us a comment on our Facebook page @EntertainmentDailyFix and let us know what you think of Line of Duty season 6.