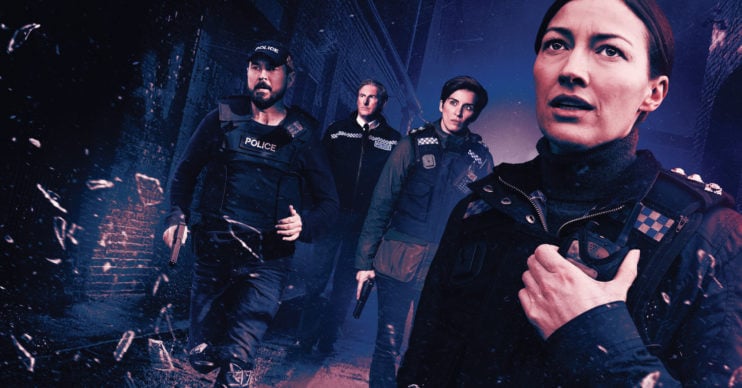 So, who is telling the truth?

Line Of Duty continued its sixth series tonight (Sunday March 28) and, as you’ll see from the reviews, intrigue deepened considerably.

Is Jo Davidson really a bent copper? Is Farida Jatri a wrong ‘un? And what was Gail Vella working on before her death?

You’d better believe we have questions!

What are our burning questions from Line Of Duty?

What was Gail Vella really working on?

It was established in episode one that journalist Gail Vella had been murdered in 2019, and that Jo Davidson and her team were working to find the killer in Operation Lighthouse.

We got more detail tonight on why a killer might have taken her life.

Gail had previously ruffled feathers when she reported on the links between the police, sex abuse and corruption within the police force.

Even real-life criminal Jimmy Savile was mentioned in one of her archived TV reports.

However, some digging by Steve and Chloe found that she had been working on a podcast that was set to expose even more. But, because her flat had been burgled just days before her murder, the incriminating tapes had been stolen.

So what had she been working on and who was she about to expose?

Who was the other person in Gail’s podcast interview?

AC-12’s forensics team managed to retrieve a snippet from one of her podcast interviews still on her computer.

However, as they listened to the footage, only a small portion remained.

In it, Gail spoke with an unnamed source, who was about to reveal some juicy intel until the recording abruptly ended. So who was the source and what was he about to reveal?

Why are Ted and Steve still in contact with Steph Corbett?

When John was brutally murdered by Ryan Pilkington of the OCG in the line of duty, and left behind a wife – Steph – and two daughters.

In the final episode of that series, Ted Hastings was revealed to have been close to John’s mother Anne Marie in Belfast during The Troubles.

Feeling guilty about Anne Marie’s murder and now her son John’s, Ted made sure Steph got a portion of the cash that was used to try and set him up.

That should have been case closed, but in this episode Ted was seen meeting with Steph. With Steve secretly watching, Steph admonished him for “not calling back”.

And then Steve drove all the way up to Liverpool to visit her. Was he trying to find out why his boss had contact with her?

Why is Ryan Pilkington back?

One shocking moment in this second episode was when OCG member and cold-blooded killer Ryan Pilkington returned to the show.

We’ve seen Ryan grow up throughout all five series of Line Of Duty – from stealing phones and being a courier for gangster Tommy Hunter as a teenager in series one, right through to slitting John Corbett’s throat in series five.

At the end of that series, we saw Ryan graduate from police college.

Now, after Farida was transferred, he took his place on the Operation Lighthouse team with Jo Davidson.

What is this ne’er do well up to? Kate thinks she’s seen him before, but isn’t sure…

Did Sindwhani purposefully delay the AC-12 on The Hill?

PCC Rohan Sindwhani appeared in series five, and here he is again.

This time there’s a question as to why he delayed the raid on Hillside Lane police station.

Could it have been deliberate so any corrupt officers could cover their tracks?

Ted seemed to think so, and his bent copper radar went haywire.

Are Steve and Kate all over?

Steve and Kate Fleming have always been a close-knit pairing.

However, their relationship now seems to be on the rocks.

They met in the familiar underpass we’ve seen in previous series when Kate was undercover.

Steve told her that AC-12 had opened an inquiry into the Gail Vella case and that the unit would raid The Hill imminently. He also offered Kate the chance to supply him intel about Jo Davidson on the down-low.

However, not only did Kate refuse but she also tipped Jo off about the raid.

Steve was not a happy bunny.

Are Kate and Jo really going on a DATE?

Jo was delighted with Kate for tipping her off about AC-12.

After last week’s stolen hand-hold between the two seemed to suggest a growing closeness, the two went out for a drink after a tough day at the office.

And, afterwards, the two arranged to meet at the weekend for a hang-out.

So what is Kate’s game here?

Is she genuinely growing close to Kate, or is she double-bluffing and playing another undercover game?

Who is telling the truth: Jo or Farida?

Jo was hauled into AC-12 and underwent one of Line Of Duty’s patented, lengthy interrogation scenes.

As they accused her of being part of the OCG, she turned the table, agreeing with them that Carl Banks could only have been killed if someone from her team had known about his whereabouts.

Jo then shifted suspicion on to Farida.

And, when police raided Farida’s house they found a cache of burner phones, which put her in a tough spot.

She, of course, denied that they were hers and cried that she was being set up.

So who is really telling the truth here? Is Farida trying to set Jo up because of bitterness over their split, or is Jo a wrong ‘un and setting her ex up for a fall?

Is Jo really a member of the OCG? And if so, why?

The final scene saw Jo drive to a deserted car park, where a bearded man in another car left her a package.

Inside was a new burner phone.

She picked it up and went back to her car and burst into tears, screaming and hitting the windows in despair.

It looked for all the world that Jo Davidson was indeed as bent as a nine-bob note and a member of the OCG.

But her reaction suggested that whatever she was doing was against her will. Is she being blackmailed? Has it got something to do with her mother?