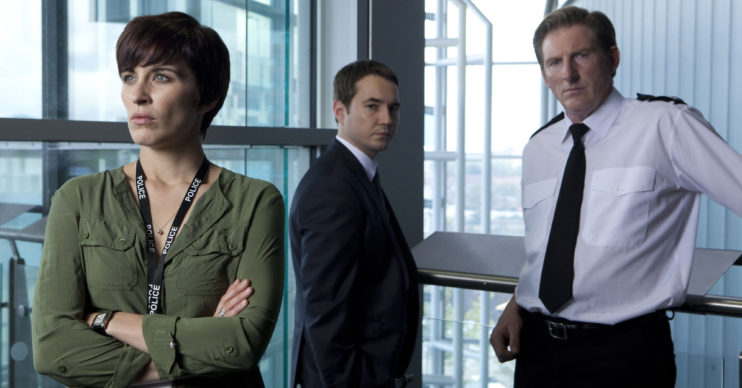 Line of Duty recap: Series 1 – 5 summed up in a seven-minute read!

Line of Duty is back and here’s the recap on series 1 -5 we all need before diving in, fellas!

The first series of Line of Duty introduces AC-12, the crack unit who police the police.

We see all the action through the eyes of new recruit Steve Arnott. He’s a cocky young copper who transfers from counter terrorism following a botched raid in which an innocent man died.

The focus is on Tony Gates (Lennie James), a smooth, handsome detective, whose squad worship him.

So high is his success rate at closing cases, there is suspicion and Kate Fleming goes undercover in his team.

Then Gates’ squad blot their copy book as two drug dealers are murdered on the notorious ‘Bog’ estate.

This happens in a house under surveillance that was left unguarded by  Matthew ‘Dot’ Cottan.

The night he receives the ‘Officer of the Year’ award, married Gates picks up a panicked call from his lover, glamorous property developer Jackie Laverty.

Read more: When is Line of Duty on?

Against his better judgment, Gates helps her cover up a drunken hit and run which has resulted in a dead man in a bush.

He later realises she has lied to him, and is laundering money for gangster Tommy Hunter.

While Gates visits her house to confront her, a masked gang burst in, slash her throat then knock him out.

The gang later kidnap Gates and take him to a warehouse. They use the horrifying sight of Jackie’s body – kept in cold storage – to blackmail him into working for them.

Gates comes good – and then a cropper

Gates tries to track down the blackmailer, with AC-12 in hot pursuit. When he realises they have cornered him, he agrees to lead them to Tommy.

He secures evidence that allows him to arrest the gangster before he kills himself by walking into an oncoming truck.

Kate and Steve tell Hastings Gates was killed chasing a suspect ‘in the line of duty’ so his family will get his pension and a pay out.

But there’s a final sting in the tail as, with Hunter in custody, Dot asks for five minutes with him, revealing himself to be none other than crooked cop ‘The Caddy’.

He has been Hunter’s inside man all along…

A police convoy transporting a protected witness ends in a bloody shoot-out, leaving three officers dead, and the witness in hospital.

A glimpse into Denton’s home life shows her living in a grim flat, with a nightmare noisy neighbour, having sold her house to pay her ailing mum’s medical bills.

Denton hits the bottle – and it hits back

But as the neighbour finds out, Denton is not to be messed with. She takes a novel approach to loud techno late at night (to be precise, smashing the neighbour’s face in with a bottle).

After seeing Denton make a dodgy call from a phone box, Steve and his new partner/love interest Georgia rush to the hospital.

There they surprise an attacker disguised as a nurse. In the struggle, Steve is knocked out, but Georgia is thrown through the window to her death.

Read more: Line of Duty: Hastings bingo – get set for all the Tedisms

Denton is in the spotlight again, but under interrogation she turns the tables on AC-12, calling out Hastings’ financial problems, Steve’s line-crossing love life and Fleming’s affair with Richard Akers.

With the dead witness identified as Tommy Hunter, Denton reveals her suspicions about her ex lover, DCC Dryden.

Swordsman Steve piles on the charm

She accuses him of involvement with the case of missing teenager Carly Kirk. Arnott, determined to get to the truth, ingratiates himself with lonely Denton and the two spend cosy evenings together.

He then announces he’s found a stash of cash at her house.

Flashbacks later reveal that Denton was involved in the conspiracy but her motive was to protect Carly Kirk, who was abused by Dryden and pimped out by Hunter. But nonetheless she’s found guilty and given a life sentence.

Season three begins all guns blazing with armed response cop Danny Waldron (Daniel Mays) turning his weapon on a suspect before ordering his team to lie and cover it up.

With questions going unanswered and the atmosphere clearly toxic, AC-12 embed Kate in the team.

Waldron goes to the funeral of his victim and follows one of the mourners back to his flat.

He accuses him of past abuse, before going on to torture and kill him – eventually decapitating him and taking his severed head off to a storage unit.

When Waldron returns to work, they raid the home of suspected drug dealers and he orders Kate to stay downstairs.

Upstairs, shots are fired and she finds him bleeding to death. His traumatised team claim it was suicide.

Searching Waldron’s flat ‘Dot Cottan’ (who of course we know now is a wrong ‘un), finds an envelope addressed to Steve.

Inside is a list of names of former abusers, including gangster Tommy Hunter, with strikes through the names of the dead.

Waldron’s former squad crumbles, with Kennedy found hanged, in what a second post mortem proves is a murder.

Eventually, under pressure of exposure, bent copper Bains admits that he was the one who killed Waldron.

Meanwhile, here’s Denton! Following a successful appeal, Denton returns, teaming up with Steve to investigate abuse at Sands View boys home, where Danny Waldron grew up. And the link to gangster Tommy Hunter!

Denton finds a copy of Waldron’s list stored online, and resists Cottan’s attempts to buy her silence, emailing it to Ted before Cottan shoots her.

Steve is arrested on suspicion of murdering Denton, but, largely due to Kate’s efforts, we discover Dot is the true culprit.

Under pressure, he sends a text requesting ‘Urgent Exit Required’ and shoots his way out of the building with Kate in hot pursuit.

But after a frantic chase, Dot takes a bullet meant for Kate and, in his final moments, records his dying declaration on her phone.

With a balaclava-clad serial killer on the loose, DI Roz Huntley (Thandie Newton) is keen to pin the crime on suspect Michael Farmer.

But Forensic expert Tim Ifield is convinced she is fitting up an innocent man, and reports her to AC-12. Cue new team member Kate Fleming.

Aware of his suspicions, Huntley goes to Ifield’s home to confront him, where a scuffle between the two leaves her unconscious.

Believing he has a corpse in his kitchen, Ifield suits up and is ready with plastic sheeting and a chain saw, when Huntley suddenly comes to…

Ifield loses as Huntley ‘comes back from the dead’

The next day, Huntley is back at work, although with a nasty graze on her arm and, days later, Ifield’s body’s turns up, minus a couple of fingers…

Having tampered with the evidence to ensure no one finds her blood at the scene, Huntley plants samples linking Ifield to the original murders – thus disposing of both of her problems.

But Steve has his suspicions, and, realising that she has lied about her whereabouts on the evening of the killing, he goes to the office of Huntley’s husband Nick.

Here a baseball bat wielding balaclava man tosses him down three flights of stairs, leaving him in a pool of blood on the concrete.

The net closes in on ACC Derek Hilton

With the net closing in on her, Huntley turns to her old friend ACC Derek Hilton, who leaks her information she uses to get the investigation against her shut down.

But her arm is getting worse and, after collapsing at home, a mad dash to hospital follows.

She wakes up, with Nick by her side. He tells her doctors had no option but to amputate her hand.

She discharges herself and vengefully fits her husband up for Tim’s murder by planting Tim’s DNA on his jumper.

Huntley even arrests him herself.

Now in receipt of Dot’s dying declaration, Hilton plays it to Hastings and accuses him of being H.

A suspicious Steve (who has made a miraculous recovery and is back at work in a wheelchair) and Kate work overtime to prove Huntley’s guilt.

Finally, Huntley admits to the killing, claiming it was self-defence. But in a shock move, she then arrests her solicitor Jimmy Lakewell.

He had informed Hilton who then ordered the attack on Steve.

Hilton escapes, but is later found dead in an apparent suicide.

On finding that the gang includes an undercover officer, Steve and Kate assume it is McQueen.

But it is in fact John Corbett (Stephen Graham) who has gone rogue, having had no contact with his handlers for months.

Cue a super violent and convoluted game of cat and mouse. There are rivalries between separate criminal gangs. There’s mistrust between the forces. And the continuing search for corrupt cop, codenamed H.

Conspiracy victim PC Maneet Bindra, tries to atone for previously betraying AC-12 and reaches out to the OCG.

They slit her throat.

Corbett kidnaps Steve, and assures him that he isn’t ‘bent’. He asks Steve to help him expose a corrupt senior officer.

Determined to flush out H, who he believes is Ted Hastings, Corbett organises a raid and shoots bent cop Les Hargreaves dead.

Later, he tricks his way into the home of Ted’s wife Roisin and delivers a paramilitary style punishment beating.

With suspicions growing, DCS Patricia Carmichael from AC-3 is brought in to quiz Ted.

But the tables turn when senior legal counsel to the police Gill Biggeloe is exposed as corrupt.

She orders an ‘urgent exit’ from the OCG but instead bent cop PC Tranter stabs her in the toilets. Steve then shoots him dead.

The suspicion may be off Hastings for now but, on rewatching Dot’s dying declaration, Steve realises that H is still at large.

And as a final treat, junior gang member Ryan, who first appeared as a little boy on a BMX shouting ‘You bent bastard’ at Tony Gates, is now a trainee police officer.

He is preparing to go straight and dedicate his life to the Line of Duty (or then again, perhaps not!).

Here endeth the Line of Duty recap… roll on series 6!

Which has been your favourite season of Line of Duty? Tell us on our Facebook page @EntertainmentDailyFix.