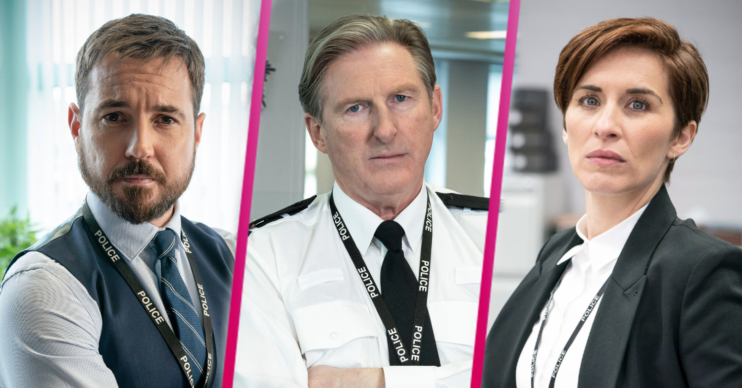 Line of Duty: Will Sunday’s finale be the final episode ever?

Mother of God, make it happen!

A Line of Duty new series is still up in the air, according to reports.

The news comes as series six ends explosively this Sunday (May 2) and there’s only one question on everyone’s lips.

Quite aside from the identity of ‘H’ or ‘The Fourth Man’, viewers are desperate to know whether there will be a seventh series of the hit BBC One crime drama.

So what’s the latest news on a possible series seven?

Will there be a new series of Line of Duty?

Series six has attracted huge viewing figures, edging up towards 15million per episode.

However, Mercurio recently told the Radio Times: “We’re in a situation where it’s not entirely clear that there will be a seventh series.

Read more: Line of Duty: The 34 questions Jo Davidson said ‘no comment’ to!

“We would hope there could be.

“But we’re having to do our planning coming out of COVID, and a whole bunch of other things, around the idea that these things aren’t guaranteed at all now.”

With the COVID situation calming down and the incredible response to series six, you’d have to think a seventh series is in the pipeline.

What did the cast say about a possible series seven?

There was more encouraging news from the cast.

“We’ve got to get onto Jed and say ‘look, we’ve got to do one that’s not like when we were in lockdown.

“You know it’s a great city to have fun in, Belfast, so we really want to get back to doing that again.”

“I think with Jed, there’s always potential for it to go on,” he said.

“He could always start a new case, there’s always anti-corruption out there, as he would say.”

Have I missed all the tweets where people are saying #LineofDuty well and truly jumped the shark this season? pic.twitter.com/FEeuUyYsio

Sorry but this series of #LineofDuty has been a massive let down. It’s been one trip down the rabbit hole after another each week and I’m now in massive doubt we’re going to find Alice or H next week…

Can't be arsed with another series #LineofDuty

What do viewers say?

Despite the incredible response and the encouraging words from the cast, some viewers out there think this would be the right time to end the series.

One viewer said: “Have I missed all the tweets where people are saying #LineofDuty well and truly jumped the shark this season?”

Another viewer took to Twitter and called series six a “massive letdown”.

Finally, a viewer said that he “couldn’t be arsed” with another series.