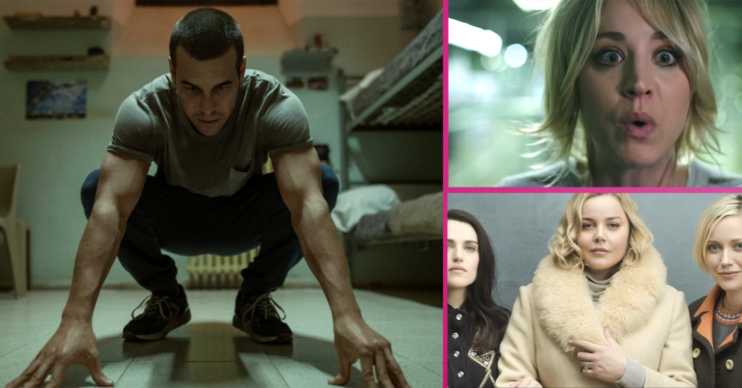 Line of Duty finale: Crime drama series that will fill the Ted, Kate and Steve hole

Plus a look at Pursuit of Love, literally filling next week's Line of Duty slot!

The Line of Duty finale is on Sunday (May 2) and viewers will be bereft at the hit crime drama’s finale.

It leaves a huge hole in the schedules.

So what’s going to take its place next week, and what other twisty-turny crime dramas are out there to help get your fix?

What’s after the Line of Duty finale next week?

The BBC’s next, big Sunday-night drama – which takes the place of Line of Duty – in its schedules is period story, The Pursuit of Love.

An adaptation of Nancy Mitford’s famous novel, it tells the story of two cousins living in 1920s Oxfordshire.

Linda dreams of a life of adventure, while Fanny is more concerned with settling down after being abandoned by her mother.

Things change for the relatives when a glamorous local aristocrat invites a charming stranger to a ball.

Why is it worth watching?

Who doesn’t love a period drama about passion and fractured families?

However, it was the pair’s relationship away from the cameras that made the headlines.

Married Dominic and Lily were snapped enjoying an intimate dinner while filming in Rome, and the former admitted that he had “feelings for her”.

This Australian thriller series started this week on More4, but is available to watch on All4.

Olivia’s perfect wedding turns deadly after one of her bridesmaids unknowingly invites a dangerous stranger into their lives, triggering a deadly chain reaction that blows open a hidden world of secrets.

Stand by for forbidden affairs, strained friendships and revelations galore.

Starring Kaley Cuoco, this high-energy, twisty-turny thriller with a comic edge has become a cult favourite.

Flight attendant Cassie Bowden likes to party on her downtime, and she hooks up with a good-looking passenger in Bangkok.

After a wild night on the tiles, she wakes up hungover and next to the hunk in his hotel room.

There’s only one problem – he’s dead.

Over on Netflix, a Spanish adaptation of hit American crime author Harlan Coben’s bestseller, The Innocent, will stream from Friday April 30.

It tells the story of Mateo, who is starting over with wife Olivia after he’s released from a nine-year stretch in jail.

Nine years earlier, he was convicted of manslaughter after accidentally killing a man.

But just when he’s settling back into life, he receives an unexpected video call from a mysterious man from his past.

Coben is king of the twist, so this could be worth a watch.

Based on the Oscar-winning film by the celebrated Coen brothers, Fargo is a highly quirky but brilliant crime series.

In the past it has starred the likes of Martin Freeman, Kirsten Dunst and Ewan McGregor.

Now, next Sunday (May 9) it’s back for its fourth series on Channel 4.

This time it stars the likes of Chris Rock and Jessie Buckley in a tale set in the 1950s American midwest.

Look out for quirky characters galore, some comedy and some gripping scenes. An acquired taste, but a great series nonetheless.

BBC One has released a tense first trailer and six new images for #Vigil, the forthcoming thriller series from @WorldProds, the makers of #LineOfDuty, #Bodyguard and #ThePembrokeshireMurders. Watch the trailer and view the images here > https://t.co/29WkDFKZNB pic.twitter.com/KduCnRxs0L

Coming soon to BBC One is Vigil.

Starring Suranne Jones, Line of Duty’s Martin Compston and endeavour’s Shaun Evans, it’s a tale of murder… on a submarine.

Suranne plays the investigating officer trying to get to the bottom of it all.

With a thrilling trailer now released, we’re standing by for this – it should be coming very soon to the channel.

If you want all the ingredients that make Line of Duty a success (corruption, guessing games and edge-of-your-seat action), 1990s series State of Play is a must.

John Simm stars as journalist Cal McCaffrey, who investigates a drug-related killing and finds the victim is linked to the accidental death of a researcher who works for politician Stephen Collins (David Morrissey).

Instead of bent coppers, we have bent politicians!

Read more: Line of Duty season six: Evidence stacking up that Chris and Chloe are both BENT

And guess who else stars in the series?

Line of Duty star Kelly Macdonald (as well as a young James McAvoy and Billy Nighy).