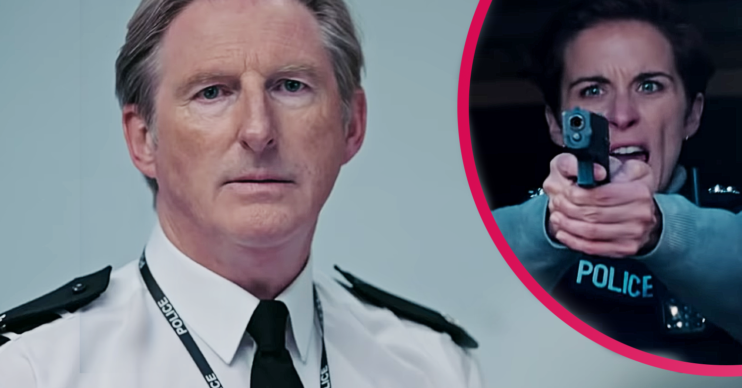 Mother of actual God! And we have to wait until Sunday?!

The Line Of Duty finale is almost upon us, and the BBC has released a trailer today (Monday April 26).

Furthermore, after seeing the 35-second trailer fans immediately responded, saying the finale is going to be “EPIC”.

It certainly packed a lot into its short time, with an explosive ending and the identity of ‘H’ teased.

What happened in the series finale trailer for Line of Duty?

The trailer began with Superintendent Ted Hastings saying: “All of these suspicious deaths were orchestrated by one officer in particular.”

Viewers then saw Jo Davidson led from custody in handcuffs, and taken to a new location in a van.

Read more: Line of Duty: Marcus Thurwell is NOT dead according to the latest fan theories

Leland has previously tortured the likes of Lindsay Denton in past series. Could this mean the end for Davidson?

Elsewhere, the mystery of the identity of ‘H’ was also teased.

Focusing in on a piece of paper with the word ‘definately’ written on it, the camera panned to Ted Hastings.

Upon seeing the word Kate Fleming and Steve Arnott looked at each other suspiciously.

The trailer ended with an explosive armed shootout, with both Arnott and Fleming brandishing guns.

How did fans react to the trailer?

Fans immediately replied beneath the video and they couldn’t hide their excitement.

“Jesus Mary and Joseph and the wee donkey!!! It’s gonna be EPIC,” one screamed.

Read more: Line of Duty star Anna Maxwell Martin delights This Morning fans with how different she is in real life

A third wrote: “This is going to be a long week MJE!”

Finally, a fourth shouted all in capital letters: “MOTHER OF GOD!!!

“THAT GIVES ME EXCITED CHILLS. MORE QUESTIONS WITH THAT TRAILER BRILLIANT.”

The series finale of Line of Duty is on this Sunday (May 2) at 9pm on BBC One.