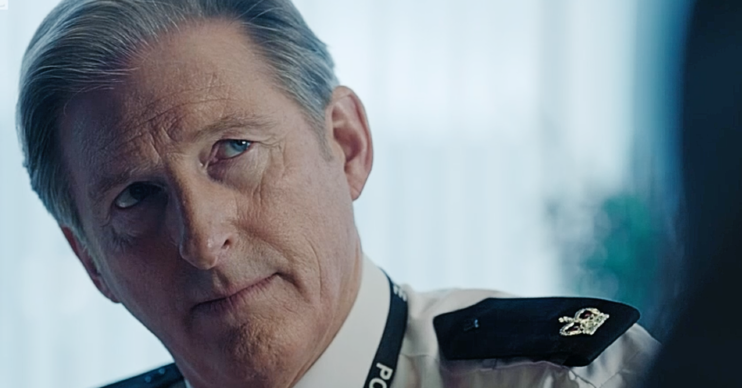 Line Of Duty: Ted Hastings fans love ‘houl yer wheesht’ catchphrase but what does it mean?

Subsequently, fans were on Ted Hastings watch, eager to see which new Northern Irish catchphrase he came out with.

And they weren’t disappointed.

What was the new catchphrase in Line Of Duty?

DI Steve Arnott went to his boss after receiving a call from Sergeant Farida Jatri who accused her boss, DCI Joanne Davidson of being a bent copper.

Steve presented the evidence to Ted, and showed him the members of Davidson’s team.

After seeing Kate’s photograph in the file, Ted seemed to change his mind about the investigation.

And, when Steve persisted and pleaded for Ted to open an inquiry, the Superintendent cut him short.

Twenty Minutes in and Ted has already told Steve Arnott to houl his wisht. Line of duty does not disappoint. #LineOfDuty

One fan wrote: “Watching #LineOfDuty and in a matter of a few minutes Adrian Dunbar said both ‘banjaxed’ and ‘houl yer whisht’ and I’m a happy wee Fermanagh girl right now.”

Twenty minutes in and Ted has already told Steve Arnott to houl his wish.

Another said: “Twenty minutes in and Ted has already told Steve Arnott to houl his wish.

“Line Of Duty does not disappoint. #LineOfDuty”

A third asked in amazement: “Did Hastings just say ‘Haud your wheesht’ #LineOfDuty”.

What does the phrase mean?

Despite viewers’ delight at the new catchphrase, there was confusion about its correct spelling and its origin.

On the subtitles supplied by the BBC, the phrase was spelt ‘Houl yer whisht’.

Read more: What is a CHIS and what does DIR mean? Line of Duty series 6 acronyms and police jargon explained!

After more investigation, the phrase ‘haud yer wheesht’ is Scottish in origin.

The phrase was first used in the 14th century and can be used as a verb, a noun, and an interjection.

However, the Ulster-Scots Agency told ED! that the nearest to correct spelling is ‘houl yer wheesht’.