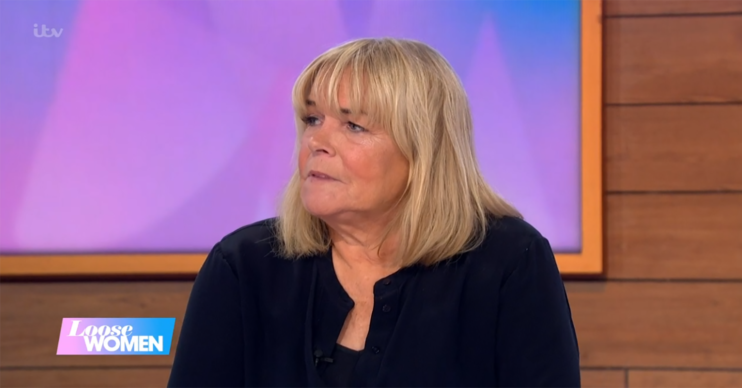 Linda Robson got emotional as she revealed her beloved dog Ernie has died on today’s Loose Women.

The Birds of a Feather star, 62, said four-year-old Ernie was put to sleep and her family are “distraught”.

Linda said Ernie was the “loveliest little dog” and was “a part of the family”.

She said: “Just over a week ago, we lost our little dog Ernie.

“He was a French Bulldog and we had him four years and not long after we got him, we found out he was deaf.

My grandchildren are absolutely distraught and so is my daughter.

“He was the loveliest little dog, my grandchildren are absolutely distraught and so is my daughter whose dog it was.”

Linda continued: “He was a part of the family.

“Even though he couldn’t hear, when you came in the house, I don’t know if it was the vibration or he could smell us but he would come running down the stairs.

“He was a little character. We’ve got a window in our lounge and it’s got a blind on it and the blind was always up because he sits at the window when we’re out and waits for us to come back.

“Since he passed away, we’ve got the blind closed.”

Linda said she and her family were with Ernie when he died.

She said: “We got [to the vets] at about six o’clock and we stayed with him until 10 o’clock.

“He had a spinal injury and we don’t know how it happened but apparently it’s quite common in French Bulldogs.

“We had to make the decision when it was time to give him the injection.

“It was one of the hardest things that you have to do. We were all round him and he could see all our faces.

“He was just licking our faces and then they gave him the injection and it took about two minutes for him to go.

“He did die peacefully with all of us around”

“We’re just waiting for his ashes now. Our house is completely different. We would have sold our house if we could have saved him.

“But there was nothing we could do. He did die peacefully with all of us around.

“He was the only one that loved lockdown because he had us there 24 hours a day.”

We're sending all of our love to Linda and her family, who had to say goodbye to their beloved dog, Ernie ❤️

May he rest in peace 🌹

Linda then reached for a tissue as she teared up.

Viewers sent their condolences to Linda on Twitter, with one person saying: “It’s so sad to lose a loved animal companion.”

Another wrote: “Heartbreaking hearing Linda talk about losing her beautiful dog on @loosewomen.”

A third added: “The love you have for your dog is unconditional. The bond is unbreakable.”