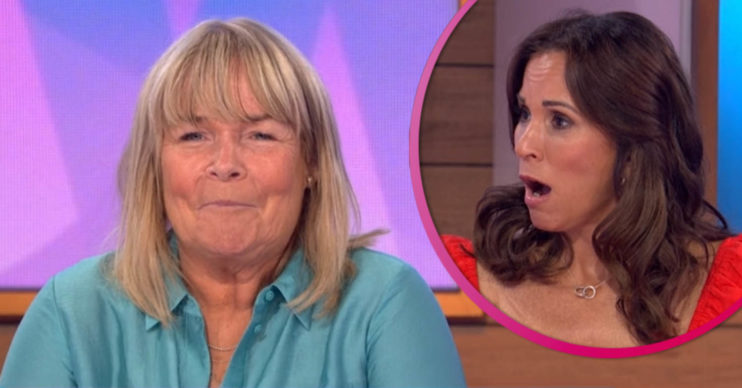 Linda got a black eye after being punched!

Linda Robson has revealed she was once mugged for a bag of dog poo.

The Loose Women star spoke about the bizarre moment on today’s show (July 28) as the panellists discussed the reasoning behind designer bags for dog poo.

Linda, 62, explained she once put some of her dog’s poop in a Selfridge’s bag.

Read more: Linda Robson tears up as she reveals her beloved dog Ernie has died

What did Linda Robson say?

Linda said: “I did have an occasion once where I woke up in the middle of the night and I could smell poo from downstairs.

“So I went downstairs to the front room where my dog had had an accident, got it all up and I actually put it in a Selfridge’s bag.

“I put the poo in the Selfridge’s bag, went to the front door, looked to make sure no one was looking, and there was one of those big dustbins that put all your rubbish in.”

She continued: “So I thought I’d sneak over and put it in that because I didn’t want it in my dustbin.

“I walked across the road to put it in the bag and this bike came past me, punched me in the face, and took the Selfridge’s bag and drove off.”

I had a black eye and all he got was a bag of poo.

Andrea McLean said: “You got mugged!”

Linda said: “I had a black eye and all he got was a bag of poo. Serves him right.”

Meanwhile, Linda was emotional as she revealed the loss of her dog Ernie on Loose Women earlier this month.

She said: “Just over a week ago, we lost our little dog Ernie.

“He was the loveliest little dog, my grandchildren are absolutely distraught and so is my daughter whose dog it was.”

“Our house is completely different”

Linda added: “We’re just waiting for his ashes now. Our house is completely different. We would have sold our house if we could have saved him.

“But there was nothing we could do. He did die peacefully with all of us around.

Read more: Loose Women viewers throw their toys out of the pram as show is cut

“He was the only one that loved lockdown because he had us there 24 hours a day.”

Linda then reached for a tissue as she teared up.