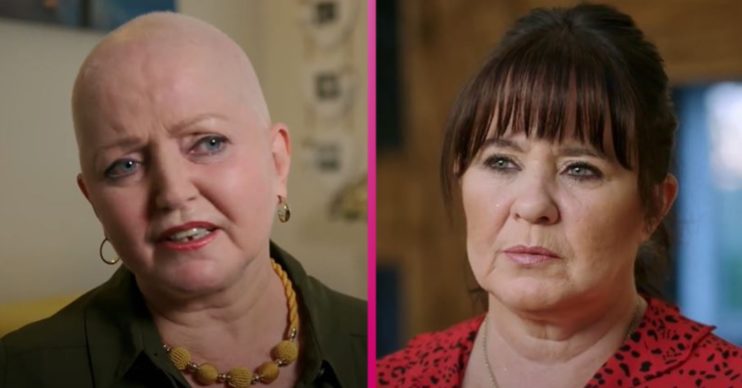 Linda Nolan tells her sisters her cancer has spread in tonight’s episode of the family’s reality series.

During Tuesday (December 14) evening’s instalment of At Home With The Nolans, Linda gets the results of her cancer appointment – and breaks the heartbreaking news to her siblings.

Presenter Coleen Nolan and her sisters Anne and Denise arrange to meet Linda and Maureen after the appointment at Linda’s favourite bar for a socially distanced drink.

What happens on At Home With The Nolans?

Anne says: “Linda is getting her results today, so Coleen, Denise and myself have arranged to meet her and Maureen and her favourite cocktail bar to hear the results.”

What does Linda tell her sisters?

She fights back tears as she talks her sisters through the next steps.

“I have to have more chemo,” she says, pausing to compose herself. “[The tumours] have minutely got bigger.”

Anne, in shock, says: “I’m just so upset because I thought it was going to be good news.”

And Linda, vowing to remain positive, says: “It’s good news in that they can still treat it. We might have a little cry, and then we’ll have a little laugh, because we always do that. But as long as we have a piña colada at the end of it, we’ll be fine!”

I’m living with cancer, that’s what I’m doing. It’s not going to beat me.

Coleen says: “I think we have to continue to always try and find the positive. We do grasp opportunities now to spend more time together and to live life and enjoy it for however long we’ve got.”

Defiant Linda vows cancer will ‘have a hard fight’

In her defiant final word on the matter, Linda vows that cancer will not take control of her life.

She says: “I’m living with cancer, that’s what I’m doing. It’s not going to beat me. If it does get me eventually, it’ll have had a hard fight, I’ll tell you that!”

Read more: Linda Nolan reveals she’s ‘as bald as a badger’ but feels ‘well’ as she and sister Denise urge Brits to get their flu jabs

Later, in her bid to not let her illness get the better of her, Linda reveals she has had some success using dating apps.

“I’m actually talking to four gentlemen,” she informs her sisters, before a fifth match comes through. “It’s good fun, flirting a little bit on the phone!”

– At Home With The Nolans continues on Tuesday (December 15) at 10pm on Quest Red. It is also available to stream on discovery+