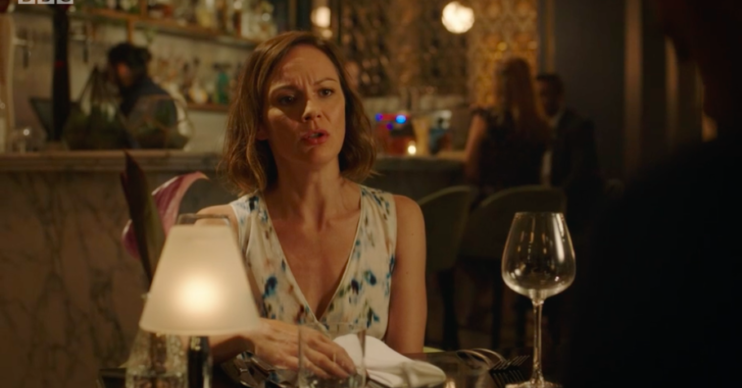 Life on BBC1: Was Kelly gay? And other burning questions after episode three

David investigated Kelly’s past, while Hannah got closer to Andy...

Life continued on BBC One tonight (Tuesday October 13 2020) and ended with the mother of all twists.

Six-part series Life, from the makers of Doctor Foster, caught up with the Manchester neighbours as they each continued to grapple with huge trials in their lives.

***Warning: spoilers from Episode three ahead***

What happened in episode three of BBC One’s Life?

David investigates Kelly’s past, unsure of what he’s looking for.

Aware she had a secret phone, he sends a message to everyone in her email list asking for the truth about his late wife.

Meanwhile, Hannah asks Liam for a break after becoming claustrophobic in the relationship – leaving room for Andy…

Belle’s ex-husband Neil walks back into her life, and Gail finally tells Henry her true feelings about their relationship in an explosive confrontation.

In an explosive twist at the end of episode three, we discover that Saira knew Kelly – probably intimately.

After David is told that his wife Kelly was unfaithful, he finds solace in the arms of his student Saira.

He kisses her, and the pair fall into bed with each other.

But when David falls asleep, Saira creeps out of bed and finds Kelly’s laptop – the very same computer David has been desperately trying to unlock since episode one.

Saira KNOWS the password and, after entering it, the screensaver immediately confirms that Saira and Kelly were close.

They are seen cuddling in an intimate photo.

At the same time, Belle is at a gay bar with niece Maya, and sees a photo on the wall of Kelly and Saira clearly on very friendly terms.

Was Kelly having an affair with Saira?

Why is Saira with David in BBC One’s Life?

Saira knew Kelly, so why has she now latched on to Kelly’s husband David?

David and Saira ‘bumped into each other’ in the first episode, when David went on a break to try to get over his late wife’s death.

We know Kelly used the apartment for writing, so is that how she met Saira?

Was their meeting a chance encounter or did Saira engineer it to feel closer to Kelly?

Or could it be a guilty conscience?

Will Hannah choose Liam or Andy in BBC One’s Life?

Hannah is engaged to be married to Liam, but clearly still has feelings for Andy.

Andy is the father of her baby Evie, but hasn’t been made to feel welcome by Liam…

At the beginning of episode three, Hannah tells Liam she needs some space.

She wastes no time getting Andy around, and there’s evident chemistry between them.

They come close to kissing… Until Liam ignores her wishes to keep away and arrives home.

And will Hannah choose Andy before he moves to Leeds? We hope so!

Who is Belle’s ex Neil and why did they split up in Doctor Foster?

Belle bumps into her ex-husband Neil during an ill-fated night out with her yoga class.

There’s clearly something in the air between them, and Neil seems to still carry a flame.

He orders a glass of wine for Belle, which she doesn’t refuse.

Alcoholic Belle, who has been trying to stay clean, can’t resist the temptation and gulps it down.

Doctor Foster fans will recognise Neil and Belle from the BBC One series.

Neil cheated on his wife Belle – known then as Anna – with Gemma.

Gemma slept with Neil so that she could blackmail him in order to uncover the state of her husband’s finances.

Anna later learned that Neil was still enjoying one night stands with women, despite promising to stop, and she finally left him to move to Edinburgh.

Now she’s in Manchester and Neil is back… But why?

Has Belle fallen off the wagon?

Viewers know that Belle is an alcoholic, but she’s been trying to stay sober.

After bumping into her ex-Neil, and drinking a glass of wine with him, she carries on drinking.

She has an emotional conversation with Maya and they go clubbing together.

Belle downs shots and is seen dancing carelessly with her niece – finally letting go of all her tension.

But will she be able to stop drinking? Or will her house of cards come tumbling down?

Is Henry a gaslighter?

Henry shows all the signs of gaslighting his wife Gail.

His behaviour is typical of coercive control.

Henry constantly mocks his wife, belittles her and talks over her, not taking her seriously.

He’s now using the fact that he’s dying as another way to control her.

Will Gail go back to Henry?

At the end of episode three of BBC One’s Life, Gail leaves Henry.

She demands Henry listens to her, and finally confronts him about his behaviour towards her.

Viewers see her leaving the block of flats in a taxi.

But will she be able to leave her husband, knowing that he’s dying?

Life continues on Tuesdays at 9pm on BBC1. The whole series is available to watch now on iPlayer