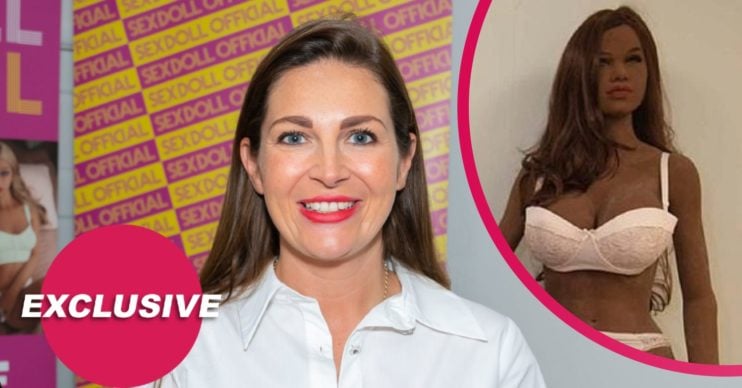 Her business, Sex Doll Official, has boomed during lockdown

Life-like sex dolls have never been more accessible thanks to business owner Jade Stanley, who’s on a mission to normalise her niche of the sex toy industry.

Her company, Sex Doll Official, features in an episode of Channel 5’s documentary series Adults Only.

When we sat down for a chat with Jade, the businesswoman and mum-of-four shed light on some of the despicable requests she receives – and revealed how much of a comfort dolls are to genuine customers.

Her company, Sex Doll Official, offers an insane level of customisation in its dolls and clients can have the faces and other body parts exactly how they want them.

Unfortunately, it means Jade and her team have to knock back some truly “horrible” requests.

She told us: “I’ve had some horrible requests for more child-like dolls, which really disturbs me.

“I deal with every single customer and I see it all and hear it all. I can’t, morally, ethically, it’s not something I’d ever entertain.”

Jade explained how people who want more child-like dolls ask for them in a “roundabout” way, but she susses them out straight away.

“What they do is, they go about it in a roundabout way,” she explained. “They go, ‘I want a small doll, I want it this height…’ I won’t sell dolls that are less than 140cm.”

I’ve had some horrible requests for more child-like dolls, which really disturbs me… it’s not something I’d ever entertain.

Jade also revealed how requests for Sex Doll Official’s products have gone through the roof during lockdown – and said she believes one positive of the dolls is the companionship they offer.

She said: “I’ve had customers contacting me, thanking me about how amazing it is that they actually have somebody in their home, there, with them.”

Those customers, Jade said, would have felt alone otherwise.

“I know that people say, ‘Oh sex dolls, aren’t they funny’ or whatever, but no, there’s so much more to them,” she continued.

“You’ve also got to remember that it’s COVID-safe sex, that’s a massive selling point of these dolls. People can’t go out now. Socially awkward people, for instance, they couldn’t go out and visit a brothel or have an escort, that’s an impossibility.

“Apart from the fact that these establishments are closed, you’ve got the severe issue of the transmission of COVID-19, so having a sex doll is fantastic.”

She also revealed that sales of the company’s male dolls have “definitely” risen since lockdown kicked in last March.

“Our male dolls have been selling really well, really really well,” she told us enthusiastically. “[We’ve] definitely seen a jump in sales with them.”

Life-like sex dolls to look like deceased partners or celebs

Asked about the requests they get, Jade spoke about customers asking for dolls to look like a deceased partner.

“It is a common request,” she said, before adding: “But we do so much more than that.

“People have sex dolls for all kinds of reasons, but ultimately the reason people have a sex doll is because it’s companionship. They are companion dolls. Loneliness, now, is so eminent in our society because of what’s going on.”

She revealed that US megastar Kim Kardashian’s likeness is a common request for the dolls they make.

“We get lots of requests for Kim Kardashian,” Jade said. “But I can’t make a Kim doll because I don’t have her permission. The possibilities are endless, though, especially if we have permission off the person.”

Asked what some of the more unusual requests are, Jade said they’ve had a fair few odd ones.

Vaginas on breasts and feet

She said: “I had someone request a vagina in a breast, which I was able to do. Genuinely, any strange requests I’ve had, I’ve never not been able to fulfil it, because it’s unbelievable what you can do.

“We’ve also had a request for a vagina in a foot on the doll, as well as the regular vagina.”

Jade predicts that dolls will eventually become as mainstream as other sex toys.

“Why can’t we have a sex doll shop on the high street?” Jade asked. She hopes to eventually open a pop-up store for Sex Doll Official, once the pandemic is over. “Why can’t we give that option to the public? This is not seedy, this isn’t something that needs to be hidden away.

“Dolls provide an exceptional amount of comfort to many, many people, and if you could hear some of my customers, you would really understand. There is so much more to it.”

– Jade and her business feature in Adults Only: Sex Dolls Gone Wild, which airs on 5Star at 10pm on Monday, February 1