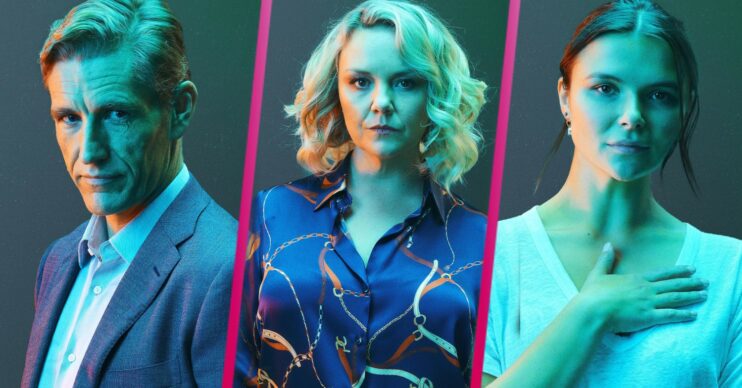 Lie with Me on Channel 5: Who’s in the cast alongside EastEnders star Charlie Brooks?

It's set and filmed Down Under, with mainly Australian actors

Lie with Me begins this week and promises to be the distraction we all need post-Euro 2020 and Wimbledon – so who is in the cast of the Channel 5 drama?

One Times reviewer has described the new four-part series as “brazenly silly” which is EXACTLY what we need right now!

Even better, the series is set in Australia so will deliver the sunshine that the UK is sadly lacking at the moment.

Here’s everything you need to know about the cast of Lie with Me.

Anna is a British woman who relocates to her husband’s native Melbourne with their two small children.

She’s seeking a fresh start for their marriage which isn’t all flowers and romance – far from it.

The couple hire a young local nanny, but she isn’t the innocent stranger she pretends to be…

Viewers know Charlie as the character we all love to hate in BBC soap EastEnders.

She played Janine Butcher from 1999 to 2014 – and is returning this year to reprise her role as the super villain.

Janine was involved in several big storylines – most notably the not-so-accidental death of husband Barry in 2004.

Charlie has also starred in dramas including Wired, Bleak House and Moving On.

She also won the 2011 Strictly Come Dancing Christmas Special and the 12th series of I’m a Celebrity in 2012.

Brett Tucker portrays Jake Fallmont in the Channel 5 four-part drama Lie with Me.

Jake is Anna’s husband – and the clues in episode one point towards him being a pretty suspicious character.

While his wife Anna is desperately trying to save their marriage – moving to the other side of the world to do so – Jake is always texting someone else and hiding things.

However, the successful lawyer insists he’s not cheating…

But is he telling the truth? Or hiding something even more sinister?

Australian actor Brett, 49, is probably best known for his role as Daniel Fitzgerald in Neighbours, and Dave Brewer in McLeod’s Daughters.

Read more: Lie With Me on Channel 5: Who does Charlie Brooks play in new thriller?

Anna and Jake Fallmont hire Becky to work for them and look after their two children.

However, Becky isn’t the innocent stranger she pretends to be…

And it will lead to murder.

Actress Phoebe is a relative newcomer to acting.

Her first role was as a child star in a 2002 episode of Australian soap Doctors.

Back in 2013 she played Morgan in the comedy series Ja’mie: Private School Girl.

Since then, she’s appeared as Saskia in Nowhere Boys, and popped up as unnamed roles in Glitch and Utopia.

Liam is the gardener and groundskeeper, who can’t help but notice that Anna and Jake’s marriage is on the rocks.

As the episodes go on, he becomes entangled in the drama.

He tells nanny Becky on her arrival: “Something’s not right in this house.

“If I were you, I would get out while you can.”

Alfie Gledhill, 29, has been acting since 2012 when he played Reuben in Circle of Lies.

Since then, he’s starred in Dryfire, Hiding and The Gods of Wheat Street.

Lie with Me cast: Who else stars in C5 drama?

TV viewers will know actress Caroline from her role as Cheryl Stark in Neighbours.

She’s also appeared in Offspring, Home and Away, Underbelly, Bed of Roses, The Magistrate and Prisoner Cell Block H.

Isabella is best known for starring as Phoebe Nicholson in Home and Away.

She also portrayed Jessie Davies in Playing for Keeps, and Tanya in Sex and Death.

Neil Melville plays Ray Tucker, the taxi driver who Anna regularly hires, as she can’t drive in Australia yet.

Neil has starred in Picnic at Hanging Rock, Jack Irish, Playing for Keeps and Offspring.

Are you excited to watch Lie with Me on Channel 5? Leave us a comment on our Facebook page @EntertainmentDailyFix.