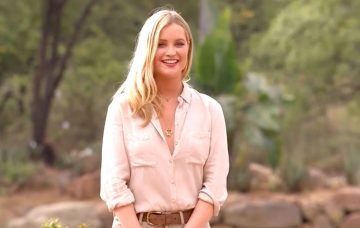 Presenter was let down by her shoes

Laura Whitmore introduced ITV’s all new reality show Survival Of The Fittest last night, but she didn’t quite put her best foot forward.

The presenter suffered a wardrobe malfunction that left her wearing two odd shoes.

The mishap appears to have been the result of packing in haste and repenting in, well, not quite leisure.

The show kicked off with Laura greeting contestants at the house in South Africa, and presenting them with their first challenge.

But while she looked collected on screen, there was trouble afoot – literally.

Laura took to Instagram to reveal her mistake, sharing a shot of her feet in all their mismatched glory.

The shot read: “When you realise you’ve packed two odd shoes” with an added, “I’m an idiot” for good measure.

She also shared a behind-the-scenes shot with a full outfit breakdown – but couldn’t resist commenting on the acts of nature going on in the background.

“First show, first look,” she said. “Love a style diary, instead of silly shenanigans in the background like I’ve done in the past, here’s some breathtaking mountains.

The lions weren’t the only ones feeling affectionate – back at home, Laura’s pet dog Mick showed his love for his absent mum.

Laura shared a shot of the pooch trying to get close to her, but until we invent a way to get through the television screen, Mick’s efforts will be in vain.

Survival Of The Fittest continues tonight on ITV2 at 9pm.

Is Survival Of The Fittest filling the hole left by Love Island? Leave us a comment on our Facebook page @EntertainmentDailyFix and let us know what you think!