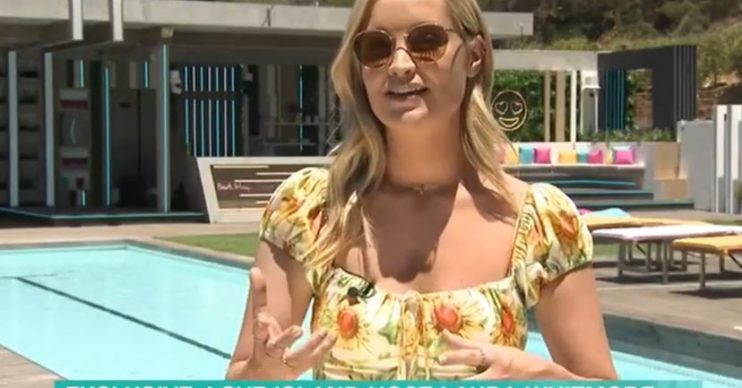 Series six is just days away

New Love Island host Laura Whitmore has revealed how Caroline Flack backed her for the role after stepping down following her assault charge.

The 34-year-old Irish presenter featured on today’s (09.01.20) episode of This Morning for a segment about the villa lined up for the new winter series.

Read more: Love Island finalists earn an average of £296k PER MONTH after leaving the show

Speaking with hosts Holly Willoughby and Phillip Schofield via video link from the villa in Cape Town in South Africa, Laura reflected on the “whirlwind” that followed Caroline’s departure.

“When did you know you were doing the show?” Holly asked her. “When did you get the call? Because that was all a bit whirlwind, wasn’t it?”

Laura replied: “Yeah, it was a little bit of a whirlwind. When Caroline stepped down, she actually sent me a text message saying, ‘I really hope you get to do this series’.

“But then there was speculation in the papers and I know as much as everyone else knows.”

Laura went on to recall the crazy moment she heard the show’s producers were interested in having her on board.

She actually sent me a text message saying, I really hope you get to do this series.

She said on This Morning: “It was before Christmas and I was flying back to Ireland because it was my mum’s birthday. I was at the airport and I got a phone call from my agent saying the producers of ITV will like to meet with you for a meeting in a few hours.”

Laura initially worried she couldn’t make the meeting because of her mum’s birthday.

She continued: “Then I thought, hold on a minute, I’ll ring up Mammy Whitmore, which I did. I said, ‘How do you feel if I come tomorrow instead of today?’ And she said that was okay. Thankfully, that’s why I’m here now.”

Elsewhere on the programme, Laura revealed that contrary to speculation, she will be hosting companion show AfterSun alone and not alongside her husband Iain Stirling, who is Love Island’s voiceover man.

That’s because AfterSun is filmed in London, she explained, and Iain is required to remain in South Africa every day. Laura, on the other hand, will be flying between the UK and South Africa once a week.