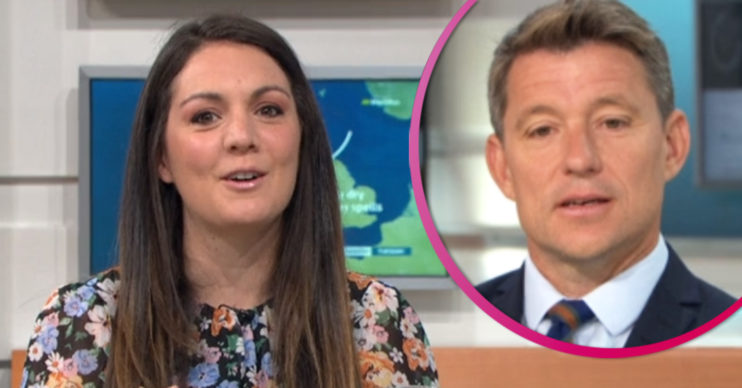 Laura Tobin has poked fun at co-star Ben Shephard ahead of his unexpected appearance in Coronation Street.

The Good Morning Britain host is set to make an upcoming ‘cameo’ in the ITV soap as Mary Taylor’s secret crush.

During Ben’s debut scene, Mary has a comfy-looking blanket printed with pictures of his face.

Is it me or is this a little sinister 😳🤣 https://t.co/biYvnhbfep

What did Laura Tobin do?

The preview clip was aired on GMB today (August 4), with Laura later taking to Twitter to unveil her own spin on Mary’s blanket.

The 38-year-old presenter shared a series of photographs of herself with a cut out of her co-star in her home.

Laura posed with Ben in various places, including her bed, in the garden and in an inflatable swimming pool.

The host appeared delighted as she snuggled and pointed next to Ben in one.

Alongside the hilarious snaps, Laura wrote: “Who doesn’t love @benshephard? Mary in @itvcorrie has a ‘Ben blanket’ I have a life size cut out of Ben who lives in my house!

He loves chilling on the hammock and in the paddling pool.

“He loves chilling on the hammock and in the paddling pool @GMB @andipeters.”

However, clearly amused by Laura’s efforts, Ben joked: “Is it me or is this a little sinister.”

He also added a string of laughing emojis.

Fans were just as amused, with one writing: “That’s our girl Laura. We definitely need something to smile about.”

In addition, another added: “Hope your husband doesn’t mind sharing you!”

She said: “In Mary’s world, being embraced by Ben is her idea of heaven.

“She’s put two and two together and come up with 10 and I think it’s a brilliant idea. She could get a chain going of Ben products.”

After that, Ben replied: “I’m very, very flattered. I’m very flattered as well that someone as discerning as Mary would think that I could offer some kind of solace in these times of need and such uncertainty!”

However, the 45-year-old star also revealed that his friends have been mocking him for the blanket since the Corrie clip aired.

“I am getting a lot of grief from my friends about the Ben blanket,” he admitted.

“Apparently there’s orders already gone into the golf club, they’ll be in the golf shop.”

In addition, he said: “Two of my friends… they’ve already put in orders. My friend John said, ‘I watch Corrie all the time, I can’t believe you’re going to be on the cobbles’.”