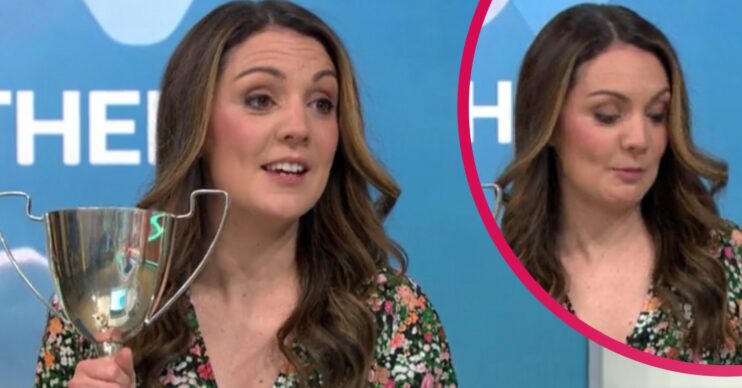 Kate wanted to 'breathalyse' her

GMB weather presenter Laura Tobin had many viewers in hysterics earlier today (Friday March 18) after turning up to work late.

The TV star, 40, apparently slept in after a work outing last night.

She got ribbed by GMB hosts Kate Garraway and Ben Shephard in her absence when she wasn’t in position to deliver the weather forecast early on in today’s episode of the ITV programme.

But while many viewers joined in with the banter on social media, others deemed her “unprofessional”.

Laura was later seen at her desk just before 7am, revealing she hadn’t set her alarm after getting to bed late.

And she came in for more teasing – both in the studio and on Twitter – after she spilled her drink!

Laura Tobin: Where was the GMB star?

Ben and Kate joked while on air around 6.20am that they were going through a “man down” situation as they addressed Laura’s absence.

The event raised money for the Disasters Emergency Committee – and GMB won. Laura had shared snaps from the bash, showing her holding the winners’ trophy, on Instagram.

Read more: Who is Laura Tobin’s husband? Is the GMB weather girl a qualified metrologist?

Kate cheekily joked about the missing Laura: “Likes to celebrate doesn’t she?”

The presenting pair went on to poke fun, suggesting Laura isn’t always the first to go to bed in such circumstances.

They then revealed she had actually overslept as her empty desk was shown.

When Laura did turn up, she came in for more gentle mocking from her colleagues.

She explained: “One thing I forgot to do was to set an alarm to wake up.”

Laura went on to add she was finally roused by a phone call from a member of the production staff.

“I’m not entirely sure the words I said to her were polite, and I’m here,” Laura continued.

She went on to reveal she was tucking into chicken nuggets for breakfast. But as she picked up her mug, she then tipped some of what was inside over her desk.

“Should we actually let Laura on live television?” Ben quipped.

And Kate continued: “Has anybody breathalysed her?”

The majority of those reacting on social media seemed to be very amused by the teasing she got in the studio, likening it to other workplaces when colleagues arrive late, adding plenty of crying laughing emojis to their posts.

“You made it in then?” one Twitter user joked to her.

“Better late than never,” chuckled another.

And someone else related: “Yes @Lauratobin1. We’ve all been there! #lateforwork.”

Another person laughed as they tweeted: “I really want some chicken nuggets now.”

Others, meanwhile, were very entertained by Laura’s spill.

“Highlight of the morning was when @Lauratobin1 spilled the Coke out of her coffee mug,” one tweeted.

And another teased: “Try and drink the coffee, don’t waste it.”

I loved the mug of tea just poured happily over the desk made me laugh. 🤣🤣🤣 pic.twitter.com/97Ag7h7PE9

Others however took the opportunity to chide Laura.

“Very unprofessional. Oversleeping and turning up late when you’re on national television,” one unhappy viewer claimed.

Another echoed that thought: “Least she can do is make the effort to be on time. Quite unprofessional.”

And someone else tweeted: “Hope Laura was tested on level of alcohol on board. [I’d have] been given the push if I arrived at work having been on the lash the night before.

“Some jobs you can’t even drink 24 hours before being on duty.”

Good Morning Britain airs on ITV, weekdays, from 6am. Just in case Laura needs another reminder.