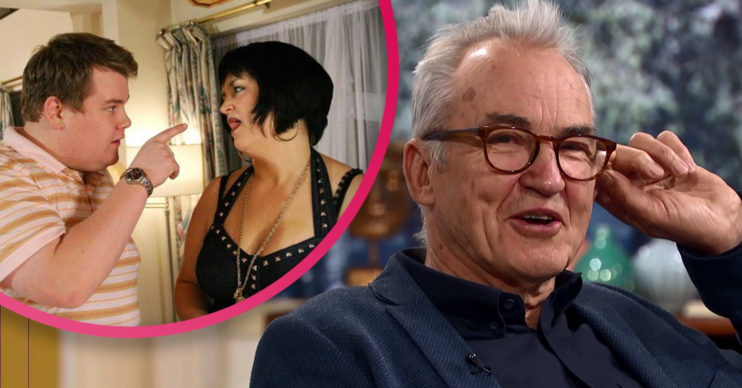 The Mick Shipman actor spoke out on GMB

Larry Lamb opened up about the future of Gavin & Stacey on GMB today (August 14).

Hosts Sean Fletcher and Charlotte Hawkins grilled the Mick Shipman actor about the possibility of another Christmas special and the secrecy around it.

Speaking on Good Morning Britain, Larry told the presenters that the only people who could answer that question are James Corden and Ruth Jones.

He said: “The one thing I can promise you is there is no secret to keep.

“The big problem is that everyone overlooks the fact that it has to be written – and that’s not an overnight thing.

Read more: Sean Fletcher gets emotional on GMB over reaction to his longer hair

“You’ve got to make sure  that in a year’s time, everybody be available and then of course you’ve got to write it.”

During the interview, Larry admitted that it was tough keeping the Christmas special cliffhanger a secret.

Commenting on the moment Nessa proposed to Smithy, he said: “I remember when I first read it, I said to James, the whole thing’s just extraordinary –  that thing comes at you like a bear rushing out of a cave.

“There was no sense of that happening at all. Incredible. Amazing bit of writing.

“It’s no surprise that it had the affect on everybody that it did. And now, you’re just left hanging. Who knows what will happen next.”

Larry hasn’t been acting for some time due to lockdown.

The 72-year-old star explained that he has been self-isolating for the last five months due to his age.

When asked how he was coping with the isolation, he said: “I can tell you one thing, I’m not going anywhere where there’s a lot of people.

“I’m in the wrong age group for that.”

But just because he’s been self-isolating, Larry has still been making good. use of his time.

He added: “I’ve spent the last few months writing a book, which is almost finished now.

“It’s been a case of turning something negative into a positive.”

The star appeared on GMB this morning to promote a fundraising initiative being launched by children’s charity Action for Children.

On Friday August 21, the organisation is hosting an event called Boycott Your Bed.

Larry explained: “The idea is you raise money for Action For Children by going and sleeping somewhere [other than your bed].

“So I’m going to drag a bed somewhere outside in the garden, hopefully it won’t be raining, and make an effort to help the kids.

“When I was a little boy, aged about nine, my parents were coming to the volcano point in their relationship – and you did look to anybody to give you a hand.

“We weren’t starving but emotionally it was a mess and Action for Children do a great job to help kids and I like to help them.”