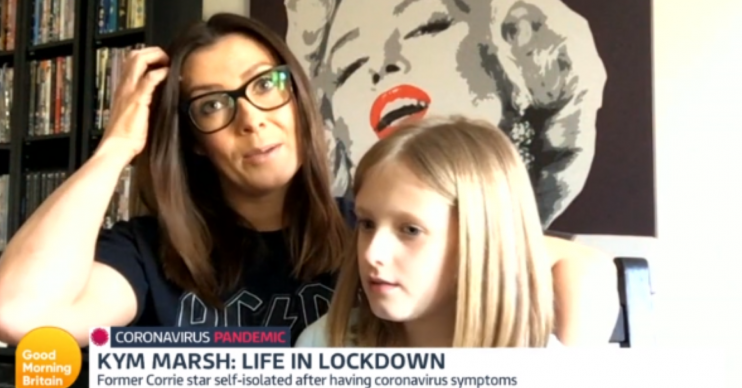 Polly is also the daughter of actor Jamie Lomas

On Good Morning Britain, Kym did a live interview with Lorraine from home with her youngest daughter Polly Lomas.

During the interview, Lorraine asked Polly how lessons at home were going.

Luckily Kym saw the funny side and laughed her daughter’s comment.

Earlier in the interview, Polly did praise her mum for still making her birthday special, despite not being able to have a party or see her friends and family.

But she’s not the smartest person.

Kym is currently isolating with Polly, her son David and David’s girlfriend. But she revealed her eldest daughter Emilie moved out of her family home with her son Teddy back in February.

The former Coronation Street actress said: “We’re going to miss his first birthday by the looks of things as well.

“Emilie moved out in February, so it’s really new anyway them not being here and living here. So now not even being able to visit or see them is really difficult.

“But she’s great because she’s sending us all photos and videos all the time and she’s Facetiming us, so we get to see him.”

Polly also revealed she’s missing Teddy saying: “It’s not really great because I don’t get to see my nephew.”

Kym is also unable to see her boyfriend Scott Ratcliffe, who is currently on deployment. His return has also been delayed until next month.

However, Kym said it was nice she was able to keep in touch with her former Corrie co-stars, who are also off work due to the coronavirus pandemic.

Did you see Kym and Polly on GMB? Leave us a comment on our Facebook page @EntertainmentDailyFix and let us know what you think!