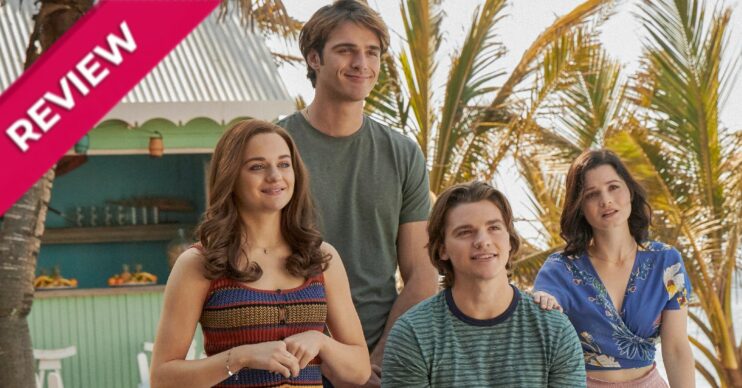 The Kissing Booth 3 sees Elle with a big decision to make as she plans her college future.

Should she go to one school with best friend Lee, or head to Harvard with hunky boyfriend Noah?

While that’s going on, Elle (Joey King) and the two brothers head for summer at the boys’ families beach house. It takes two minutes for the boys to start fighting for her attention.

Throw in a job, the re-emergence of an ex, her dad’s new girlfriend and the beach house being sold and there’s a lot on her plate.

Deciding to make the most of her time, Elle begins to wear herself thin making other people happy. But obviously, that doesn’t last too long.

Soon she’s left trying to figure out where her life is headed, and what that means to the world around her.

The cast of this film must have had an absolute blast filming this series. Of course there’s your expected beach parties, but there’s also a life size re-enactment of Mario Kart. Who wouldn’t want to do that?!

Also, the location is enviable, I considered standing closer to the screen in the hopes of getting a tan. Because there’s no way I’m getting one in England.

But weather envy aside, there are some surprisingly relatable topics on show. Can long-distance college romances survive? Is this the end of certain friendship groups? Is this what adulting feels like?

The entire film feels like an ode to how weird the chapter between high school and college is.

For a silly rom-com, there’s a surprising amount of heart to this final installment. It draws a firm line under its future in a highly satisfying way, keeping the audience happy.

Joey King is largely to thank for this. While the men around her can behave somewhat immaturely (hey, they’re teens so we’ll forgive them for it), she carries her duties as a leading lady with ease.

She may be now better known for her harder roles like The Act, but she’s also got some pretty great comedic timing.

Jacob Elordi (Noah) and Joel Courtney (Lee) are also easy to love leading men. Though it does get frustrating that both characters seem to share sexual chemistry with people that aren’t their girlfriends. To the audience, it seems obvious where their hearts seem to – or at least should – lie.

The pair make pretty perfect casting as warring brothers though, especially when it comes to Elle’s attention.

While the film could have been trimmed a little, it’s still a nice little heartwarming watch.

The Kissing Booth 3 is a surprisingly sweet and tender end to a teenage rom-com trilogy.

Both Jacob Elordi and Joel Courtney are great leading men, but it’s Joey King that is in her rightful place as a leading lady.

Juggling the harder elements of the story with the comedy, King really elevates the script to a truly touching height.

It’s definitely time to say goodbye to the gang, but it’s been a hell of a fun ride.

The Kissing Booth 3 is available August 12th on Netflix