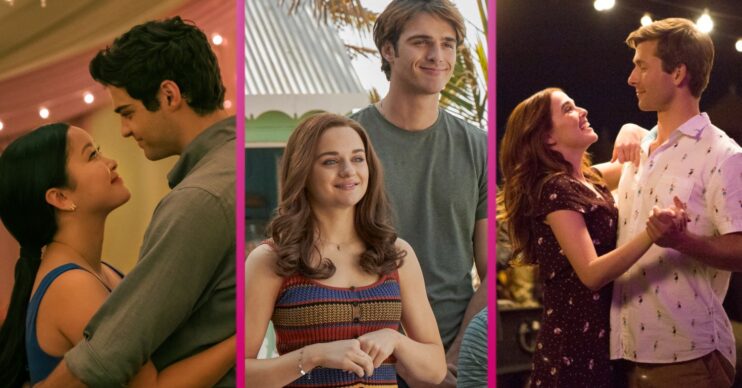 Any excuse for a heartwarming love story!

The Kissing Booth 3 is closing its doors for the final time with Elle, Noah and Lee heading off to college.

With it marks the end of another teen romcom favourite.

But thankfully Netflix has a lot more available for you to keep you busy if you’re a sucker for a good romantic flick.

And, obviously, we’re here to help you out with the essentials to tune into.

Here are a few shows and films to give you some warm and fuzzy feelings.

To All The Boys trilogy

Ok, if you haven’t watched To All The Boys… where have you been?! It was one of the biggest romcoms of recent years, and it’s just adorable.

The story follows Lara-Jean Covey, who finds herself in a difficult situation when her secret, unposted love letters are sent out. On that list is Peter, who’s just split from his first major girlfriend, and Josh, her older sister’s ex-boyfriend.

In order to make Peter’s ex jealous and to calm the awkwardness with Josh, Lara-Jean agrees to date the high school jock.

But obviously, feelings aren’t that easy to hide and soon things get romantic.

If you like The Kissing Booth, you’ll love this.

Harper (Zoey Deutch) and Charlie (Glenn Powell) are overworked and underpaid as assistants for high-flying bosses.

In a bid to be left alone and get some much needed downtime, they set up their managers on a date.

However, their plan soon has some unexpected side effects.

Lucy Liu and Taye Diggs star as the star-crossed bosses.

Rom-coms are given a hilarious send-up in this parody starring Rebel Wilson and Liam Hemsworth.

However, she wants out of it. And the longer she stays in the world, the more she realises that true love was a little more closer to home than she thinks.

Never Have I Ever

While dealing with the trauma of her father’s death, Devi Vishwakumar decides it’s time for an identity makeover. Starting with losing her virginity.

Annoyed at being dubbed an “unf***able nerd” by her nemesis Ben, Devi sets out to prove him wrong by asking the hottest boy in school, Paxton, to have sex with her.

To her surprise, he says yes. But this is where things get a little complicated.

Devi soon tries to balance obligations to her Indian family, her friends and her mission for a ‘hot girl’ life switch. It is nowhere near as easy as she thinks it is.

Gabriela finds herself at a crossroads when her boyfriend dumps her the same week she loses her job.

In a late night drunk moment (we’ve all been there), she enters a competition to Win an Inn in New Zealand – and actually gets the grand prize.

Realising she has nothing to lose, she decides to give running an inn a shot. But when she gets there, she realises the property is in disrepair.

With the help of a local handyman, she works to get the inn, and herself, back on track. Obviously, finding love along the way too.

All titles, including The Kissing Booth trilogy, are available now on Netflix.