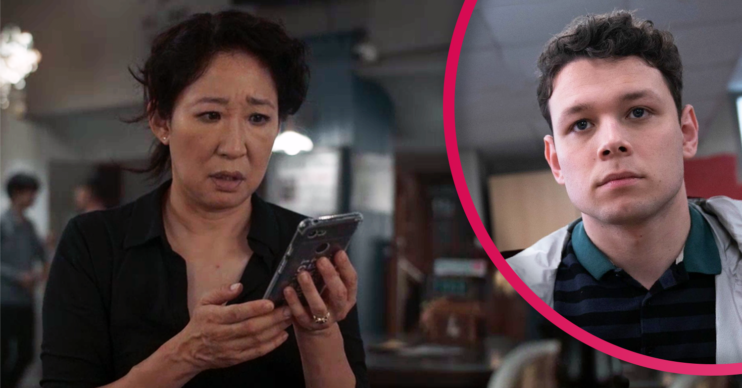 Killing Eve fans spot bizarre gaffe on Kenny’s phone – did you notice it?

Killing Eve fans were left utterly confused by a gaffe that appeared on Kenny Stowton’s phone.

Take a look at the picture below – notice anything unusual? You should do…

What happened to Kenny’s phone?

The former MI6 agent then has a rather embarrassing confrontation with his mother Carolyn at the funeral.

Clearly needing a bit of alone time, Eve heads to the pub where she tries to unlock Kenny’s phone.

When she gets the device out of her bag, we see that Kenny’s screensaver is bizarrely a very cheesy picture of himself.

Now, Kenny wasn’t exactly the vain type – so does this really make sense?

Was it a gaffe? Or could it have been some kind of inside joke? Either way, viewers are baffled.

Taking to Twitter, one wrote: “Please explain to me why Kenny’s phone has a picture of himself as the background. Be better #KillingEve.”

Another added:  “OK not to nit pick but does Kenny in #KillingEve have himself as his phone background???”

Moments later, a third tweeted: “Why is kenny’s phone background a photo of himself LMAO #KillingEve.”

Shortly after, a fourth wrote: “Why is Kenny’s wallpaper a picture of himself I don’t understand #KillingEve.”

It’s possible she saw a side to him that viewers didn’t –perhaps off-camera, he did love looking at pictures of himself.

Or maybe there’s another huge twist on the horizon that we simply just aren’t prepared for.

processing kenny's lockscreen being a picture of himself #KillingEve

Why is Kenny's phone background a picture of himself? I didn't think he was that vain. #KillingEve

Kenny's wallpaper was a picture of himself? #KillingEve pic.twitter.com/ieYYCqV64q

What else happens in Killing Eve?

After Kenny’s funeral, Eve strikes up an unlikely friendship with his former colleagues at the Bitter Pill.

Meanwhile, Villanelle struggles to prove herself when she’s assigned a trainee to mentor.

Will she ever make it to Keeper status?

What did you think of Killing Eve? Are you a fan of Dasha? Leave us a comment on our Facebook page @EntertainmentDailyFixand let us know what you think of this story.