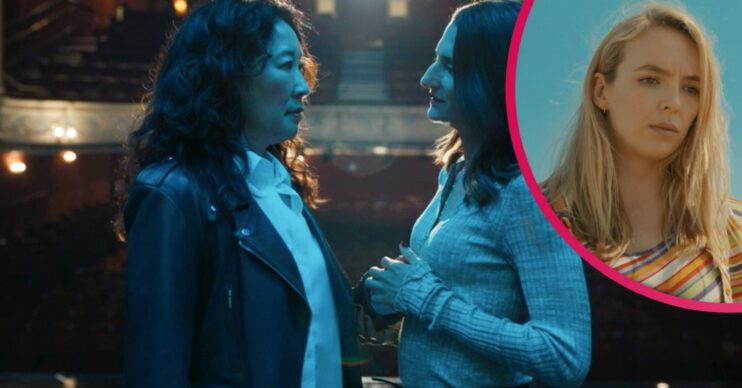 Killing Eve episode 4: 5 questions we have after tonight’s episode

Episode 4 of Killing Eve left us all speechless after it ended on an intimate note.

Meanwhile, Villanelle broke out of prison and formed an unlikely alliance with an old friend.

We’re already halfway through the final season of Killing Eve, and yet fans are still left with so many unanswered questions.

Here are 5 burning questions that we all want answered after tonight’s episode (March 26).

Is Fernanda’s ex-husband Lars Meier the one Helene is after?

It’s clear from the very beginning of season 4 that French assassin Helene is after the leader of The Twelve.

We even find out that Helene is supposedly the one torturing the members of The Twelve to get to the top.

At the start of episode 4, we see Helene and Eve meet at an empty theatre in the West End for dessert.

Eve is convinced that Helene is after Fernanda’s ex-husband Lars Meir, who she thinks is The Twelve’s ring leader.

After while of playing mind games with Eve, Helene finally admits that Lars is the one she is after.

Going one step further, Helene even tells Eve: “I’ll race you. Let’s see who can find him first.”

But is Lars really the man at the top?

Or is this all just a part of Helene’s game?

What’s next for Konstantine and Pam?

However, Pam has trouble following her first order, which is to push an innocent woman off the pier.

Disappointed in Pam, Konstantine tells her that she’s a “nobody”.

This strikes a nerve in the mortician and she eventually shows her untapped potential by pushing Konstantine off the pier.

Fans are intrigued to find out if Pam actually has what it takes to go through with becoming an assassin.

Did Carolyn really meet Villanelle in the orphanage?

After breaking out of prison, Villanelle was tasked with a “sensitive” job by French assassin Helene.

We then see the stone-cold murderer drag Carolyn out onto a beach and attempt to murder her with a wrench.

However, in a last-minute effort to save herself, Carolyn admits that the first time she met Villanelle was in the orphanage.

The pair then take a trip down memory lane as Carolyn recalls an anecdote of when she first met Villanelle.

But, even though she chooses to believe Carolyn, Villanelle doesn’t seem to remember any of it.

So was the story actually true?

Or was this all just an elaborate ruse to avoid being brutally murdered by Villanelle?

Will Villanelle and Carolyn form an alliance?

After Villanelle attempted to take Carolyn’s life, the pair strangely start to bond.

Carolyn reassures Villanelle that her psychopathic tendencies are not evil but “primal”.

After all, “why waste your time being good when you can just be good at what you’re good at?”

Wiser words have been spoken, Carolyn.

The duo then set out on a mission to find out whoever’s torturing The Twelve.

However, how can we forget that Villanelle was sent by Helene to kill Carolyn?

Will Villanelle choose to side with Helene and kill Carolyn or will she form an alliance with her?

Will Eve and Helene get together?

Towards the end of episode 4, we see a steamy interaction between Eve and Helene as they awkwardly share a bath together.

However, they quickly discover that a bath is only meant for one person and get out to have some soup.

Viewers were then left in shock as Eve does the unexpected and kisses Helene.

She also confesses that Helene has “no idea” how much she loves their game of cat-and-mouse.

So what does this mean for Eve and Helene?

Although this isn’t the Eve and Villanelle romance we’ve all been desperately hoping for, fans are excited to see where this relationship is headed.

What did you think of Saturday’s episode of Killing Eve? Head to our Facebook page @EntertainmentDailyFix and let us know.