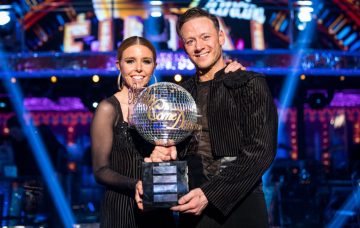 He finally made it!

After dance pro Kevin Clifton was announced as this year’s Strictly Come Dancing champion alongside Stacey Dooley, his former celeb partners have sent messages of congratulations.

His 2017 dance partner, comedienne and actress Susan Calman, who came seventh with him, wrote: “You could probably hear my cheers from Glasgow. So pleased for you. Worthy winners and all round gorgeous people.”

Hurrah! Well done @keviclifton and @StaceyDooley! You could probably hear my cheers from Glasgow. So pleased for you. Worthy winners and all round gorgeous people. What a wonderful night. pic.twitter.com/kgY81xmQZb

EastEnders star Kellie Bright, who partnered him in 2015, praised him for everything he does on Strictly…

Yay!!!!! You did it @keviclifton if anyone deserves to win Strictly it’s you my friend. Everything you have given to the show for the past 6 years goes beyond what most mortals merely dream of. You. Are. The. Best. Partner. ❤️❤️

Former Saturdays member Frankie Bridge reached the final with Kevin in 2014. She tweeted: “About time!”, adding that the title was “so deserved”.

Kevin’s first ever partner, Susanna Reid, who made it to the finals her year, also shared her congratulations.

Congratulations to you & the AMAZING @StaceyDooley 🍾♥️

Abbey Clancy, Kevin’s second partner, and Louise Redknapp, who was by his side in 2016, also reached the finals with him.

This win has been a long time coming. Kevin joined the show in 2013 and, until last night, had made it to the final but not won a record four times. He and Susan Calman finished in seventh place last year.

It was evident to everyone watching how much lifted that glitterball meant to the Grimbsy dancer, as he sobbed.

Partner Stacey told him: “I should say something quite poignant, shouldn’t I? You know how highly I think of you.

“I think you are the biggest gem. It’s no surprise you have been in the final as many times as you have.

Did the right couple win?  Leave us a comment on our Facebook page @EntertainmentDailyFix and let us know what you think