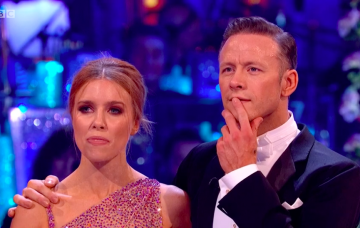 Kevin Clifton’s dad reveals why he ‘collapsed’ after Strictly win

He won the show with Stacey Dooley

Kevin Clifton was so overcome with emotion when he finally lifted the Glitterball Trophy with his dance partner Stacey Dooley on Strictly Come Dancing that he dropped to his knees and sobbed.

Now his proud father Keith Clifton has revealed why his son had such an extreme reaction to winning the dancing competition.

He told Grimsby Live: “His knees gave way. He was relieved. It was shock and relief. He had been in four previous finals. He was overjoyed, not just for himself but for Stacey too.

“He put in 14-hour days throughout the series to try and maker her a wonderful dancer. Stacey wanted to be the best she could be and he was prepared to help her all the way.”

Kevin, 36, and Stacey, 31, had paid tribute to his hometown, Grimsby, with their first dance of the night.

Keith, who was joined in the audience by Kevin’s mum Judy to see Kevin win after four previous appearances at the finals, said it was Kevin’s way of giving something back to all his supporters at home.

He added: “Kevin gave a big shout out for Grimsby in the programme, when he that the foxtrot. He always remembers where he comes from and is very proud that the area has supported him and Stacey.”

Keith also boasted that he “now had TWO Glitterballs” after his daughter Joanne Clifton won Strictly in 2016 with her partner Ore Odobu.

The proud parents also tweeted their support, writing: “Never doubted you… Always supporting you. Some people are rich, we’re rich in children. No comparison. Wouldn’t have it any other way.

Joanne, who is currently appearing in The Rocky Horror Show after quitting Strictly to work in theatre, also tweeted her joy at her brother’s win.

Sharing a cute snap of her and her sibling to Instagram, she wrote: “WE DID IT MUM AND DAD!!! @kevinclifton…. Can’t thank @StaceyDooley and @OreOduba enough!! @bbcstrictly #strictly #brotherandsister #strictlychampions.”

Meanwhile, Kevin’s ex-wife Karen Clifton also paid tribute to him after his win.

Karen, 36, who was the first dancer to congratulate Kevin on the night, wrote: “Kev – 5x finalist and you finally did it!! Your hard work, patience and pure brilliance paid off. So proud of you x.”

Were Kevin and Stacey your Strictly winners? Leave us a comment on our Facebook page @EntertainmentDailyFix and let us know what you think!