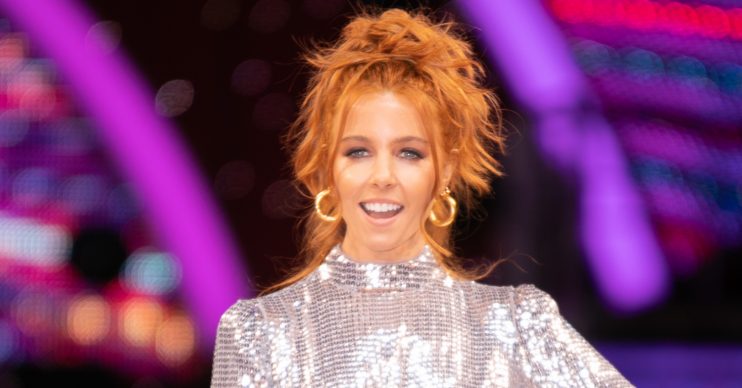 Fans agreed that the damp patch looked a little odd

Kevin Clifton joked that his girlfriend Stacey Dooley looked like she had wet herself when she shared a video of herself dancing with what looked like a damp patch on her trousers.

The Instagram video showed Stacey demonstrating some of the moves she picked up when she was a contestant on Strictly Come Dancing.

Clad in a dark top and light trousers she gyrates to the music with her hair whipping back and forth.

Some eagle-eyed fans noticed she had a dark patch on the front of her pale jeans – and Stacey admitted that her boyfriend Kevin had a chuckle about it too.

“Kev said ‘it looks like you’ve [wet] yourself,” she wrote, with a groaning emoji.

What did fans think of Stacey’s video?

Fans admitted they had been pondering the patch too.

“I wondered what was going on with the trousers,” said one person in the comments section.

Another said: “I thought you had too… not a great place for a dark patch in your denim! Fab dancing though.”

“He’s not wrong. Cool moves though,” agreed another person.

Yesterday, Kevin gatecrashed Stacey’s Saturday Kitchen interview as she revealed they were ‘living like students’ in lockdown.

Kev appeared on camera and said his mum would be ‘furious’ if she saw him on live TV looking so scruffy!

Stacey and former Strictly professional Kevin got together in 2019.

They met when they were paired up on the ballroom competition in 2018 and a few months later it was confirmed that they were an item.

Earlier this year Kevin announced he was saying goodbye to the BBC show after seven years because he had landed his “dream role” playing Scott Hastings in a tour of Strictly Ballroom The Musical.

In a statement shared to the Strictly Twitter page, the programme said that Kevin would be “hugely missed”.

To the entire Strictly family, The past 7 years have been some of the most wonderful years of my life. I am grateful to the BBC and Strictly Come Dancing for giving me the opportunity to have been a part of something truly special. Since first being called ‘Kevin From Grimsby’ by Sir Bruce Forsyth in 2013 I have experienced the highs of 5 finals, winning a Guinness World record on It Takes Two, the Strictly Arena tour glitterball and then the ultimate of winning the 2018 series with Stacey Dooley. After finishing last series with the Children In Need trophy and the Christmas Special I want to leave on a high and have therefore decided the time has come to move on and focus on other areas of my life and career. I want to thank all of the pros for inspiring me every day as well as all of my celebrity partners. The whole team behind the scenes have made always made the Strictly family what it is and the loveliest show to work for. Thank you to anyone who has ever voted for me and my partners. It means the world. And a special thank you to Jason Gilkison for always believing in me. To me Strictly always has been and always will be the best show on tv and has been an absolute dream and honour to be a part of. Pre 2013 I used to watch every week. Now I look forward to returning to being a fan and cheering on my friends who keep dancing. Kevin Clifton