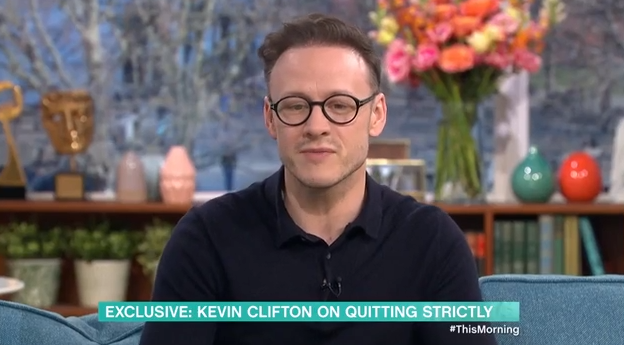 Kevin has quit the show after seven years

The 37-year-old professional dancer announced that he would be leaving the BBC One ballroom series after seven years but insists he is still very passionate about the Strictly family.

Speaking on This Morning, Kevin said: “I’ve still got so much love for Strictly. It didn’t come to a point where I wanted to walk away, I love it and love everyone who works on the show.

“I’ve done seven years on the show and felt I sort of achieved everything that I wanted to achieve.”

Shutting down rumours Stacey made him quit, Kevin said: “It’s always the woman’s fault, like I’m incapable of making a decision.

It’s always the woman’s fault, like I’m incapable of making a decision.

“I did talk about it with her and she always said to me, ‘This has to be your decision. You can’t have anyone tell you what to do here. This is a big decision.'”

Kevin – who won the Strictly glitterball trophy with Stacey  in 2018 – also hasn’t ruled out a return to the dancefloor in the future.

He told hosts Eamonn Holmes and Rochelle Humes: “Who knows? I’ve still got such a lovely relationship with Strictly and the producers of the show were so brilliant when I spoke to them and they told me I would always be part of the Strictly family.”

Kevin also admits that he is looking forward to watching the BBC One show as a fan again.

He remarked: “I’m really looking forward to watching ‘Strictly’ as a fan, I used to watch it before I was on it.

“Hopefully I’m paving the way for young dancers to come through and I’m looking forward to see what they come up with.”

Kevin has now announced his starring role in Strictly Ballroom The Musical.

He will play the lead role of Scott Hastings in an adaptation of Baz Luhrmann’s 1992 film, which is being directed by Strictly judge Craig Revel Horwood.

When asked about what influenced his decision, he told the Zoe Ball’s BBC Radio 2 Breakfast Show: “The main reason, is basically when I was 10 years old I watched a film called Strictly Ballroom, that became, sort of, my favourite film, and sort of the inspiration for everything I did after that.