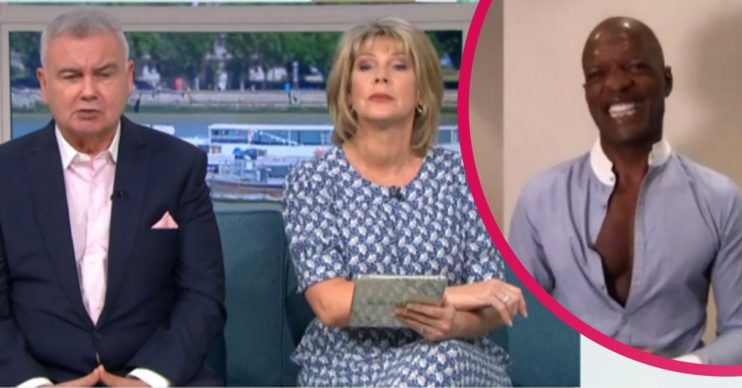 Kevin Adams appeared on This Morning today as part of This Morning’s View. But it wasn’t his opinions that got viewers talking…

The dance teacher and fitness coach appeared live via video link and had seemingly forgotten to button up his shirt!

Chatting about the day’s biggest stories alongside hosts Eamonn Holmes and Ruth Langsford, and studio guest Rob Rinder, Kevin’s shirt was the talk of Twitter!

Why were people talking about Kevin Adams’ shirt?

Kevin had left very little to the imagination with his attire, having not done up many buttons at all.

As a result, viewers could see rather a lot of his chest!

What did viewers say about Kevin’s shirt?

Those watching at home were actually a bit offended by the outfit. There were calls for him to button it up.

Some even said it was ‘too much flesh’ on display for so early in the morning.

Kevin love. Do your shirt up #thismorning

Why is Kevin half dressed for a tv interview? Surely he knew it was happening. #thismorning @ITV

#ThisMorning Kevin do your shirt up you poser!time and place

This blokes unbutton shirt is so awkward for breakfast time lol. Wayyyyyy too many buttons undone lol @thismorning #ThisMorning

Meanwhile, Eamonn Holmes unusually didn’t pass comment on Kevin’s shirt. Instead he was more fixated on the giant clock behind him in his living room!

Eamonn said: “It was James Martin yesterday, somebody else the week before: every guy I interview has got a massive clock in the background. Are they giving these away? Are there vouchers for these clocks or something?!”

Kevin replied: “I’ve got one in the kitchen, and this one is nice and big, and it’s actually a light.”

“So as you get older and your sight goes you’ll still be able to tell the time!” Eamonn quipped.

What topics did This Morning’s View discuss?

Read more: The Chase viewers warn contestant to ‘watch out’ after he passes

Kevin was on the show to talk about the government’s scheme to give cyclists £50 bike repair vouchers and increase cycle lanes.

He was all for the scheme, despite Ruth and Eamonn wondering whether it’s actually the government’s responsibility to do this.

They also talked about the obesity drive in general and whether it was right to ban TV ads that contain foods with high fat, high salt and high sugar.

And Ruth and Eamonn clashed over who does more housework in their household.