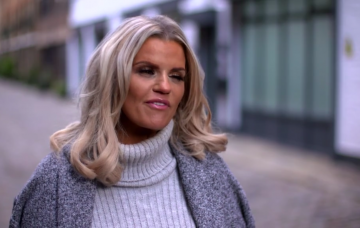 Celebs Go Dating is back with a bang – and an awful lot of booze.

Viewers of the Channel 4 reality dating show were in hysterics on Sunday night, when contestant Kerry Katona got straight down to business by, er, getting really drunk on a date.

Kerry, 38, arrived at the dating agency telling fellow contestants – including TOWIE’s Pete Wicks, Love Island’s Georgia Steel, and last year’s returning failure Sam Thompson – that she is famous for “getting married and divorced.”

Getting straight into things, matchmakers Paul C Brunson and Anna Williamson sent Kerry – who split from her last boyfriend Ryan Mahoney in October – out to a singles mixer.

She told her co-stars: “I don’t know about you lot, but I’m absolutely [bleeping] myself.”

Arriving at the party, the former Atomic Kitten started downing the Prosecco. Speaking to one guy, Miguel, she told him: I’ve got three ex-husbands, five kids, three different dads.” As he nodded, looking a bit alarmed, she added: “Bear with me, one minute.”

Kerry then downed her entire glass as expert Anna looked on in horror.

But it didn’t seem to put her date off as he told her: “I think you’re a treasure.” The pair later met in a restaurant where Kerry’s chat-up lines included: “I’ve not had a wash,” and: “When I met my first husband, he was just out of jail.”

Fans were in hysterics over the hilarious date, with one commenting: “Kerry Katona just backed off a glass of fizz whilst trying to bag herself a date 😂😂 #CelebsGoDating.” Another added: “@KerryKatona7 on @CelebsGoDating is life 😂😂 absolutely hilarious and yes it may be my 9 year old atomic kitten girl fan coming out also 💗😂.”

Another said: “@KerryKatona7 you were amazing on @CelebsGoDating last night can’t wait till tonight’s episode❤️.” While a fourth joked: “I thought my dates were bad. #CelebsGoDating.”

A few were disapproving of Kerry’s behaviour, though, with one tweeting: “Cringeworthy, cray cray, disappointing to watch her drink a lot and talk and talk.” Another said: “EMBARRASSING.”

Kerry was previously married to Brian McFadden – who she recently labelled her “favourite husband” – as well as taxi driver Mark Croft and personal trainer George Kay.

She confessed during an appearance on Loose Women: “I met my first husband at 18. I’ve always committed to a relationship. I’ve been married three times. I’ve never really done the dating thing.”

The mum-of-five also said that her kids have made her promise not to snog anyone on screen to save them embarrassment.

The next episode is tonight at 9pm. We will be watching again – and laughing again.

Do you think Kerry’s going to find love? Leave us a comment on our Facebook page @EntertainmentDailyFix and let us know what you think.