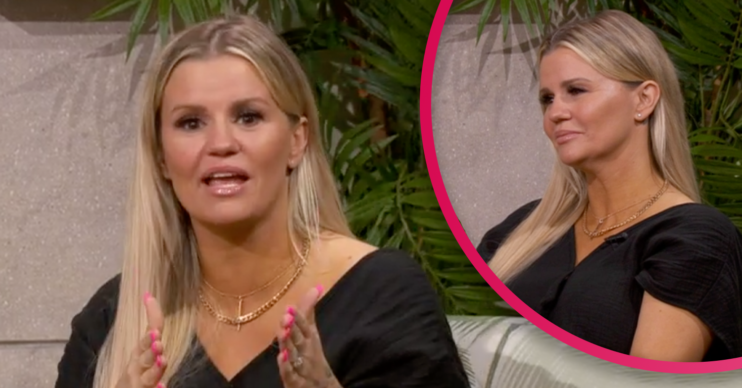 Kerry Katona has admitted the reason behind her “guilt” over her aunt Angela’s death from alcoholism earlier this year.

Kerry – herself a reformed addict – spoke to Gethin Jones and Kym Marsh on Morning Live earlier today (May 26).

During the interview, an emotional Kerry admitted she “should be dead” and revealed she washed her hands of her aunt when she relapsed.

What did Kerry Katona say about losing her aunt?

Kerry said that her aunt struggled with alcohol addiction for “years and years”. She added: “Over 20 years.”

The former Atomic Kitten star revealed: “She came to live with me and I got her sober.

“I got her doing workshops, meetings, I got her to see my doctor, I got her into exercise and she was doing so so well.

“And then I later found out she was seen with a bottle of vodka.”

‘I wiped my hands of her’

Kerry continued: “As a family member, because I’ve been on the other side of it, even I wiped my hands of her.

“That sense of guilt, even her own children, we all feel like we could’ve done more.

Read more: Kerry Katona reveals her aunt died after a battle with alcoholism

“As a family, if you can’t see something, it’s really hard to understand it. If someone says I have cancer people are a lot more understanding.

“But if somebody comes to you and says I’m an alcoholic you get angry because technically you’re doing it to yourself and you just don’t understand why they can’t stop it.

“But because I did stop it I should’ve known better. You want to shake them but it isn’t that easy.”

Kerry on her drink and drugs battle

Speaking about her own battle with drink and drugs, Kerry admitted: “Technically I should be dead.”

However, after turning her life around – and fighting back from bankruptcy – she has just bought her own house.

“I’m really proud of what I’ve achieved,” she said.

“If I can overcome these things anyone out there can do it.”

If you are struggling with alcohol addiction, the NHS can help. Visit the website here.

Morning Live airs weekdays at 9.15am on BBC One and iPlayer.