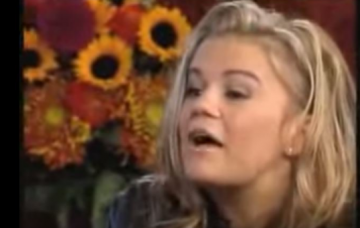 Her 2008 This Morning interview hit headlines for all of the wrong reasons, and now Kerry Katona has spoken again about her slurred speech and strange appearance.

At the time, she told then-hosts Fern Britton and Philip Schofield that she had been on medication at the time, which had caused this issues.

Appearing on This Morning today, the 37-year-old spoke more about the medication – used to treat her bipolar disorder.

Chatting with Eamonn Holmes and Ruth Langsford, she said: “My psychiatrist told me to let the public know about my drug problem, the troubled childhood, but not about my mental health.

“If you can’t see it, you can’t understand it. I’m very happy it [the interview] happened. Back in the day, everyone judged me. Fern was like: ‘Are you an alcoholic? You’re slurring?’

“Not once did anyone ask about my bipolar, or more about the medication I was taking. You can knock me down but you can’t keep me down.”

The former Atomic Kitten singer also congratulated Mariah Carey on revealing her own battle with bipolar.

“I’m absolutely over the moon Mariah has been open about it. Back then it was such a taboo, so someone with such a big platform talking about mental health – she’s going to help others.”

Mum-of-five Kerry then went on to discuss how she now copes with living with mental illness, and how it has been important to educate her children on the subject.

“I have my triggers and tools. Sometimes I still get so hyper. It’ll be sunny outside, at 11am and I’m thinking, ‘Ooo I can get a bottle of cava’. I have to stop myself.

“The lows can be difficult. There are times when I stay in bed. People can think it’s attention seeking – get up and get on with it.”

She added a warning: “It’s as severe as saying to someone in a wheelchair, ‘Get up and walk!’ It’s an illness.”

Admitting her second eldest daughter Lily-Sue, 15, is most affected by it, Kerry tells Ruth and Eamonn: “I’ll make a plan when I’m hyper and the kids will be dressed to go out, and within an hour I’ve changed it.

“It’s not fair to say the kids are used to it, but they know that’s their mum.”

Do you think Kerry was brave to be so open about her bipolar? Leave us a comment on our Facebook page @EntertainmentDailyFix and let us know what you think!