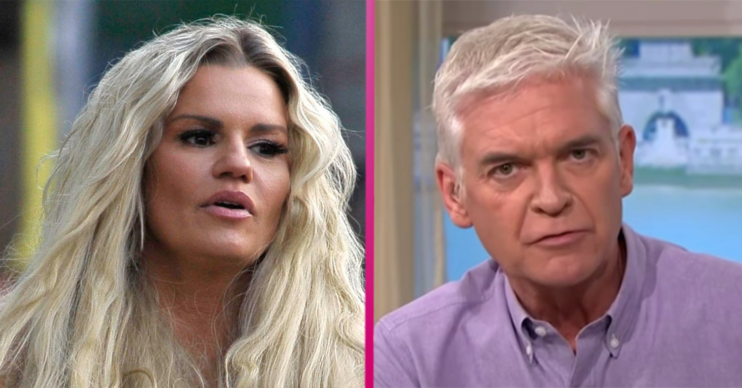 Phil Schofield and Fern Britton quized the star about her addiction

Kerry Katona has recalled the shocking TV interview on This Morning that left her wanting to take her own life.

The former singer, 40, was seen slurring her words on the ITV show during an interview with Phillip Schofield and Fern Britton in 2008.

She’s now opened up about the tragic moment and confessed that she finds it bizarre that Phil and Fern never asked about her mental health.

Instead, the former on-screen pair quizzed her on her drinking and drug addiction.

Kerry Katona reveals the truth behind This Morning interview

She told the Marnie’s Home Truth’s podcast: “Never once did they say to me: ‘Oh, oh right – what’s bipolar and what’s the medication you’re taking?’ I didn’t get any of that.

“Next day, the front page of the papers: ‘Sherry Kerry’, ‘Merry Kerry’. It was just awful. I was suicidal. I wanted to die, I wanted to kill myself. It was everywhere.

“That was pure bipolar medication. Cocaine doesn’t make you slur. I was never a really big drinker if I’m brutally honest. It was always the drugs for me.

“I never told anybody I had bipolar. I was diagnosed in 2005. My psychiatrist said to me: ‘Don’t tell the public you’ve got mental health issues because they won’t understand it.'”

Does Kerry hold a grudge against Phil?

Kerry went on to insist that there’s no bad blood between herself and Phil now, insisting lessons were learned.

“I mean I get on great with Phillip now, and he’s been absolutely lovely. I think we’ve all learnt a lot with regards to mental health. A hell of a lot.

“But even up until last year, that interview stuck with me.”

Meanwhile, Kerry is in a better place now and preparing to marry for the fourth time.

The 40 year old had been due to marry fiancé Ryan Mahoney, 32, in Las Vegas this summer.

However, with travel to America currently more difficult due to COVID-19 restrictions, the couple has called it off and hope to marry next year instead.

What do you think of this story? Let us know what you think by heading to our Facebook Page @EntertainmentDailyFix.