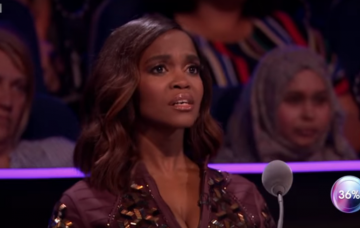 There were rumours that the infamous Strictly Curse struck again last year when tongues began to wag about the relationship between Kelvin Fletcher and his pro dancing partner Oti Mabuse.

Former Emmerdale star Kelvin, 36, and Oti, 29, won the competition after beating out Karim Zeroual and Amy Dowden, and EastEnders’ Emma Barton and Anton Du Beke in a thrilling final.

Now, Oti has addressed rumours that her relationship with Kelvin went beyond the dancefloor.

Despite the pair being happily married to their respective partners, rumours still persisted on social media.

And now Oti has quashed those whispers once and for all.

She was quoted in Fabulous Magazine, saying: “There’s nothing there. We’re acting and we’re doing it through dance.

There’s nothing there. We’re acting and we’re doing it through dance.

“The way we think of it as dancers is that it’s technically two bodies that are trying to move as one. That’s how I work and that’s how I choreograph, and my celebs understand it. This is the job. We want to win!”

Kelvin is married to Liz Marsland and they have two children together.

Throughout the series, Kelvin paid tribute to Liz, calling the moment he married her five years ago, ‘the best of my life’.

Back in December, Liz responded to her husband and Oti’s sexy dance routines.

“It doesn’t bother me. I’m used to seeing him kiss Britain’s sexiest females on Emmerdale.”

She added: “I know the biggest part of a dance is the story and making it believable. I understand it’s a performance.”

Kelvin also responded to the rumours, saying of his partner Oti: “We’ve got a great friendship, sometimes like brother and sister.”