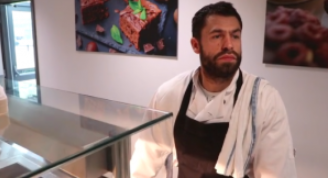 Emmerdale’s official Twitter account posted a video after last night’s episode, unveiling a new cast member who has been brought in to replace Adam Thomas as Adam Barton.

The short clip, proving that showbiz is a ruthless, ruthless world, kicked off with Danny Miller (Aaron Dingle) waiting in reception for the new and improved Adam.

Danny wasn’t the only cast member excited by the new arrival. Isabel Hodgins – who plays Adam’s wife, Victoria – was in make-up getting ‘camera ready’ even though she wasn’t actually working.

Meanwhile Natalie J. Robb, Adam’s on-screen mum Moira, could be seen limbering up for scenes with her new telly son.

And while assistant director, Sophie Stocks, popped to the canteen to get some chips for the new recruit – it was revealed that Kelvin Fletcher – who played Andy Sugden in the ITV soap until 2016 – is actually working there now.

The newbie finally arrived and was unveiled as Adam Thomas’ twin brother, Scott, who admitted he probably should have got the role in the first place, being the more attractive brother.

Of COURSE the whole thing was only made in jest, with Adam’s closest friends on set sharing some properly sweet words about his departure at the end.

We all know that no one could really replace him.

Adam’s last scenes aired last night and were uber-emotional as the character escaped from the Dales and headed to Amsterdam in a cargo container.

The police van, which was taking him to court for his sentencing after admitting killing Emma Barton, was highjacked by men in ski-masks.

Adam then realised that one of the masked men was his best friend, Aaron, who revealed Cain Dingle had cooked up the plot after finding out Moira had really killed Emma.

Cain and Aaron then dropped Ads down at the Docks where he had an emotional reunion with Victoria.

Adam Thomas took to Twitter after the episode aired to thank fans for their support during his nine-year stint in the role.

He also laughed that his little son, Teddy, really thought he’d got on a boat and left.

Adam wrote: “Teddy actually think I’ve got on a boat and left him!! I’m sat next to you!!”

You’ll be missed Adam and we wish you the best of luck for the future.