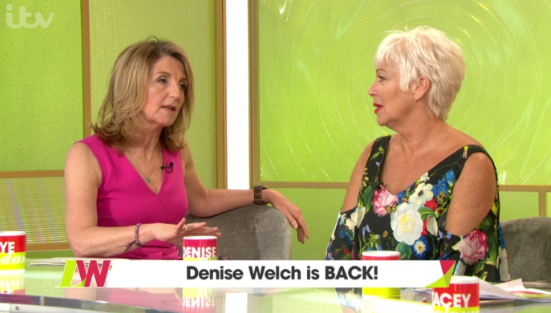 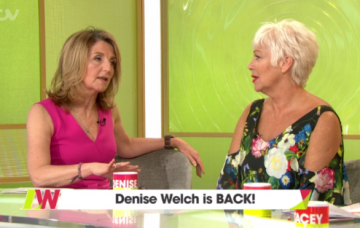 Denise Welch returned to Loose Women on Thursday and opened up about how her life has changed in the past five years since she was on the show.

The former Coronation Street actress revealed she is happily married to her husband Lincoln Townley after they both gave up alcohol – to the surprise of some of her co-stars.

Nadia Sawalha and Kaye Adams were delighted for her but didn’t hold back in admitting they were surprised the 60-year-old had managed to maintain her relationship with the 45-year-old.

Nadia told Denise: “I didn’t know you at the time so I followed your story in the papers like everyone else. I read you and Lincoln met in a club, and you were both drinking, I thought, ‘blimey, that won’t last’.”

Denise wasn’t offended and replied: “Everyone did, you did, didn’t you?” turning to host Kaye Adams, who she worked closely with during her 500 previous episodes on Loose Women.

“Yes,” Kaye admitted. “A bunch of us thought that.”

Denise went on to say that she and Lincoln, who she married five years ago shortly after she left Loose Women, made it work thanks to them both giving up the booze.

She said when they met she was having a “difficult time” as she was “self-medicating my clinical depression with drink and drugs.”

Meanwhile, she said Lincoln, who is 15 years her junior, was a “functioning alcoholic” who owned a night club.

The Waterloo Road star said the pair soon realised they couldn’t carry on as they were.

She said: “Everything was wonderful between us apart from when we drank. As far as I was concerned, his behaviour was worse than mine.”

She recalled: “We had an argument and I saw a side of him I didn’t like in drink, nothing physical or anything, and similarly he said the same to me.

“I said, ‘I don’t want to be someone who I don’t like when he has a drink’. He was so mortified at the thought of losing me, he hasn’t had a drink since.”

Denise then reached this realisation herself not long after when she had a drunken night out with the cast and crew of a theatre show she was working on at the time.

She was mortified the next day to see pictures of herself drunk in the papers and had no recollection of getting home and “smashing up” the flat she shared with Lincoln.

It was then his turn to tell her their relationship could not continue if she carried on drinking, especially now he was sober.

Denise said it was the wake-up call she needed.

“I realised he was the love of my life and I gave up after that night,” she said.

Now Denise is carrying on with roles on the stage and screen and is delighted to be back as a panellist on Loose Women.

Lincoln has taken a new career path and is now a contemporary artist.

“We have the most wonderful marriage, we are each other’s anchor,” Denise said.

She added that “soberity has had a ripple effect on our families” as her sons, Matthew and Louis, are now much happier.

Matthew is in the band 1975 and Denise said his success “wouldn’t have happened if I was still drinking.”

“He knows he can go off and fly because I am looked after and he doesn’t have to worry about me on Twitter,” she explained.

She added: “My kids are part of what keeps me sober but also what I have inside. I am a different person now.

“There is a side of me I have guilt and shame I have to deal with and work on. What Lincoln and I have and have achieved has brought me to a position where I know who I am.”

She continued to tell her Loose Women co-stars that while she has changed, she is still “good fun”.

We wouldn’t doubt it, welcome back Denise!

Are you surprised Denise and Lincoln’s marriage has lasted? Leave us a comment on our Facebook page @EntertainmentDailyFix and let us know what you think!