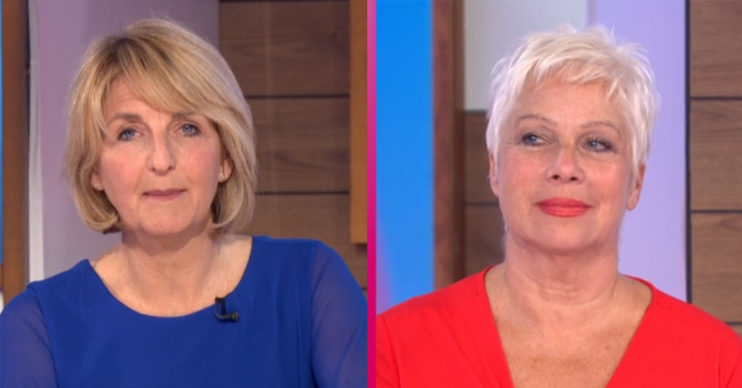 The pair appeared on Wednesday's Loose Women together

Kaye Adams has hit back at claims there was “animosity” between her and Denise Welch on Loose Women.

The pair both appeared on Wednesday’s edition of the programme but it seems one viewer thought there was something going on.

A viewer asked if anyone else watching had spotted “a slight underlining of animosity” between Kaye and Denise.

They wrote: “Did anyone else think there was a slight underlining of animosity between @RealDeniseWelch and @kayeadams on @loosewomen or am I just perceiving it incorrectly?

“If the latter – Apologies.”

Clearing things up, Kaye replied in a jokey manner.

We are off for a ( socially distanced) lunch together . I’ll ask her if she’s got the hump @RealDeniseWelch https://t.co/18kC6RFnLr

She wrote: “We are off for a (socially distanced) lunch together. I’ll ask her if she’s got the hump @RealDeniseWelch.”

We are off for a (socially distanced) lunch together.

OnlyFans is a service in which users can pay a monthly fee to access content uploaded by creators.

The service allows pornographic content and many of its users have made thousands of pounds from uploading racy photos and videos.

The panel discussed whether they would let their adult child sell saucy photos.

Carol McGiffin said: “If that’s what you want to do then I don’t have an objection to it.

“I know a lot of people are struggling and I know they’ve got to put food on the table and you’ve got to do what you have to do do.

“But I just find it staggeringly depressing, we had all those people railing against Page 3… Is this the only way people can earn money now, to sell their bodies?”

What did Denise Welch say?

Meanwhile, Denise said: “I’ve had a past, but what I’m wondering about this is, I don’t want to judge anybody for doing it, but people are reaching out for different ways to supplement their income or provide an income.

“There are people who are non-celebrities, who have normal jobs who are doing this on the side.”

Linda Robson added: “I’ve got two girls and a son and I would be absolutely devastated if they were posting pictures like this of themselves.