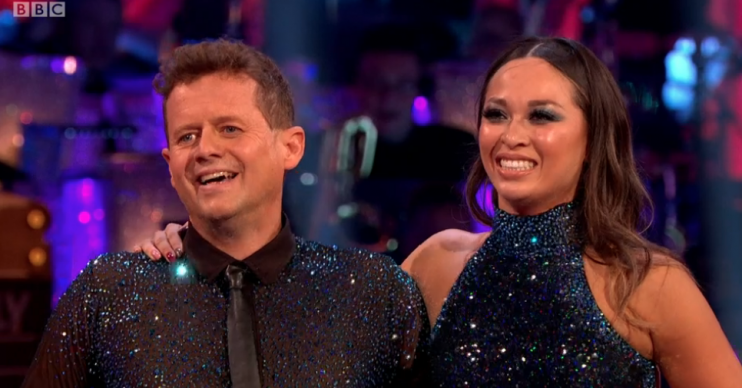 Katya Jones slapped down a troll on social media in the early hours of this morning after she was accused of ‘not doing her job’ on Strictly Come Dancing.

The 30-year-old had a torrid time on Saturday night’s installment of the BBC One dance show after she toppled over towards the end of her routine with sports presenter Mike Bushell.

Their ‘Magic Mike’ efforts for Movie Week fell apart as she tumbled dramatically to the floor, apparently due to slipping on confetti falling from the ceiling as part of their performance’s climax.

But just moments later, after receiving comments from the judges, ballroom champ Katya took another tumble – which she claims was “on purpose”.

Guys ! This is so hilarious! Me trying to hold on to @mikebreakfast tie! And then all I cared about is him finishing the routine, so I kept shouting – go! Go! Finish it!! https://t.co/IrANSaC4Dp

Having addressed the second fall on Twitter in the minutes after the live show ended, Katya returned to social media just before 2am and made light of her first trip.

“Guys! This is so hilarious!” the Russian star wrote as she retweeted a clip of her losing her footing.

She explained: “Me trying to hold on to @mikebreakfast tie!

“And then all I cared about is him finishing the routine, so I kept shouting – go! Go! Finish it!”

However, it seems an earlier comment criticising her posted by an anonymous Twitter user also caught her eye – and Katya bit.

Replying at nearly twenty to four in the morning, Katya took a dignified approach to the suggestion Mike “stands no chance” because she “is not doing her job”.

“Can you please describe my job in detail?” she fired back in the early morning rebuttal.

Just when you think you’ve seen it all on #Strictly… @mikebreakfast and @mrs_katjones bring us this Magic Mike-onic moment! pic.twitter.com/jLZTMayRq6

Her faceless detractor spluttered back: “Was I too close to the truth?”

Earlier in the evening Katya dismissed any speculation on social media that she may have been inebriated.

Mentioning her second fall, she tweeted: “FYI I did it again on purpose in Claudia’s area! And I”m def not drunk as some people think.”

– Strictly Come Dancing returns to BBC One tonight at 7.15pm