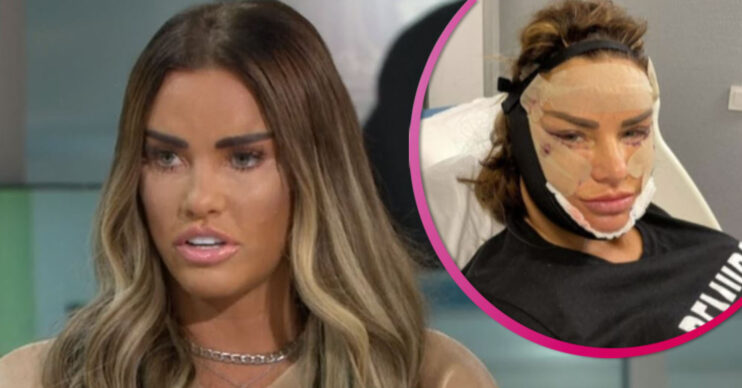 Katie Price showed off the results of her latest surgery today as she appeared on Good Morning Britain.

The former glamour model travelled to Turkey last month to undergo a facelift, full body liposuction and a lip lift.

In her first TV appearance since the procedures, Katie explained her reasons for having the surgery and insisted she isn’t addicted to having work done.

Speaking to Alastair Campbell and Kate Garraway, Katie said: “I broke my feet last year and before that I used to go running to keep fit and ride the horses.

Read more: Katie Price feared she was ‘going to die’ after recent surgery

“I can never run again, so it changed my life. I was in a wheelchair for eight months, I had to learn to walk again.

“From being in a wheelchair, I’ve put on loads of weight and I’m not used to that unless I’m pregnant.

“So I was getting frustrated. It wasn’t me, I hated it, my clothes didn’t fit.”

Defending why she travelled to red list country Turkey for the surgery amid the pandemic, Katie said: “I’m working, doing my YouTube.

“I’ve had two Covid jabs, did all my PCR tests, you have to follow protocol.

“I knew by going to a red country I’d literally be in hospital, then we flew to an amber country and stayed in a villa in the middle of the hills away from everyone, then came home.

“We didn’t muck about at all, it’s serious. It’s hard work to do a red country, and I wouldn’t have done it if I hadn’t had two jabs.”

Meanwhile, speaking about her mum’s reaction to her new look, Katie said: “I’ve had full body lipo. I had some of my own fat put in my bum and now my mum says, ‘Oh my god, your bum looks like a shelf now, we’re going to put all the glasses on there.’

The mum-of-five also said she’s “knackered” and wanted to transform herself.

“I’m not trying to look younger and I definitely don’t want that alien look – when people go over the top and look like freaks.

“Having surgery isn’t fun and games, it is painful and it’s irreversible… Everyone’s got imperfections, I could go over the top but I don’t want to look like a freak.”

Katie Price has revealed she underwent a full body overhaul with liposuction, eye and lip lifts, liposuction under her chin, and fat injected into her bum.@KatiePrice says she was unhappy after she gained weight when she broke both of her feet. pic.twitter.com/wPXhCDoDlJ

Viewers were divided over Katie’s new look, with some asking how she could afford the surgery after previously being declared bankrupt.

One person said: “I thought Katie Price was bankrupt!”

Another wrote: “Funny I thought you where bankrupt Katie, also I didn’t know plastic surgery was classed as essential travel.”

Someone else said: “She was pretty before she started on all these procedures years ago. Not sure why she feels the need to do this.”

However, others defended Katie against the criticism.

One tweeted: “I think @KatiePrice is an amazing role model she speaks the truth.”

Another said: “Fair play to her. At least she doesn’t hide it and is honest about it. So younger people know what she has had done. Good on you Katie for being honest.”

Another wrote: “Leave the poor woman alone!! It’s entirely up to her what she had done to her body.”