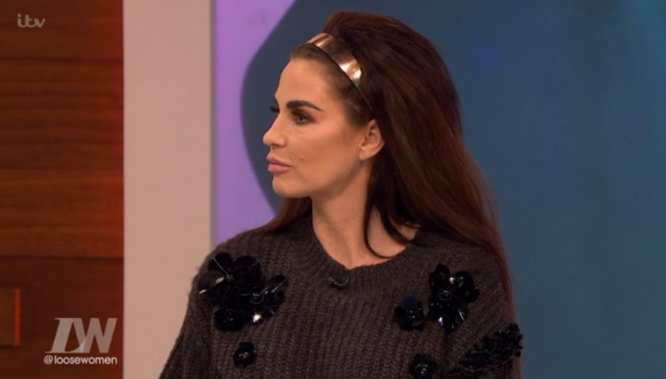 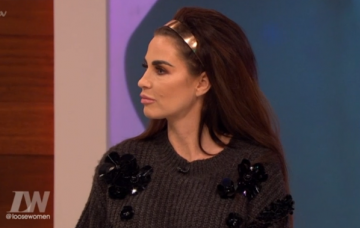 Fled the show in tears back in December

Katie Price returned to Loose Women on Thursday for the first time since fleeing the show in tears.

The former glamour model walked off the set in mid-December after becoming upset while discussing her terminally ill mother Amy.

Amy has been diagnosed with the lung condition Idiopathic Pulmonary Fibrosis, the same illness that claimed the life of Keith Chegwin last month.

Returning to the lunchtime programme today, Katie told the panel she was feeling stronger after finally reaching out and seeking help.

Read more: Lorraine Kelly says husband is a ‘walking saint’ for putting up with her

Katie, 39, said she’d become so overwhelmed with all the issues in her life, it had got too much, which resulted in her on-air breakdown.

As well as coping with her mum’s condition, she’s been battling to save her marriage to husband Kieran Hayler after he cheated on her with their kids’ nanny.

The star has also faced blackmail threats against her disabled son Harvey.

She explained how her Loose Women tears had triggered something, making her realise she needed help.

“For ages, lots of things have been building up and me being me, I don’t like being a burden on anyone. But when I watched that back, I was like, ‘Oh my God, I probably need to go to the doctors’.

“And I did go to the doctors even though it was hard. And it was the best thing I ever did.

“I sat there for two hours and got everything off my chest. Everything with Kieran, my mum, the court cases. Everything I had. And it’s so nice. It feels like my shoulders have been lifted.”

Katie then revealed the poignant reason she will continue to see her doctor for now.

“I’m going to learn to cope with my mum’s [illness] until she goes, to help me through it,” she said.

“I will keep going at it until she goes. It keeps me strong.”

The star also revealed the doctor helped her understand she needs to take care of herself better, and realise she has to have ‘me time’ amid caring for everyone else.

“This year I’m spending more time with friends and doing stuff for myself,” she said. “It’s better for your head. Onwards and upwards.”

“The doctor did say there isn’t enough done in this country to help mental health,” she added.

“It’s a massive problem. She said the brave thing and big step is coming to the doctor. But I had to. I didn’t know where to go with my head anymore.”