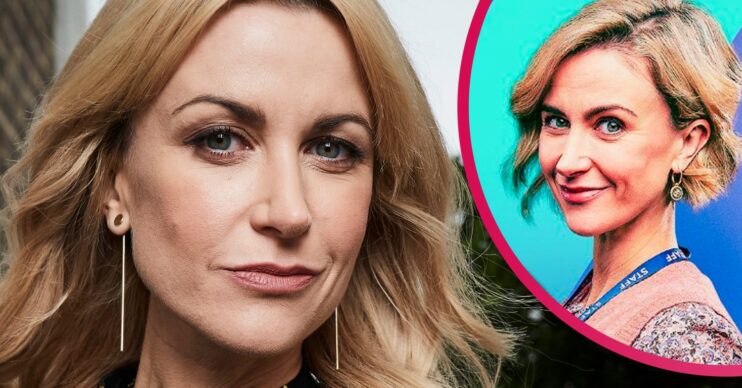 Katherine Kelly in depth: Why did her marriage break down, how old is she, and is she dating again?

She's one of our favourite TV actresses

It’s been more than 15 years since actress Katherine Kelly first stepped on to the cobbles in the role that would cement her as one of the UK’s most popular actress – but what happened with her real-life husband?

How old is she, and is she dating again?

Although the actress is known for her gritty TV roles, she’s currently starring in Sky Comedy series Bloods.

Here’s everything you need to know about Katherine Kelly in our in-depth profile.

What is Katherine Kelly famous for?

Katherine Kelly exploded on to our TV screens as Becky Granger in Coronation Street, a role she played from 2006 to 2012.

Of course, she HAD starred in other shows before – like Silent Witness, The Royal, No Angels and Life on Mars – but it was her role as larger-than-life Beaky that catapulted her to fame.

After leaving Corrie fans gutted when she left in 2012, Katherine went on to play Maloney in brilliant political crime drama The Fields of Blood.

She also starred in The Guilty as Claire Reid, and played Mrs Webb in The Secret River.

We’ve come to love Katherine for her roles in gritty dramas, including her role as Sally Wright in Innocent, Natalie Hobbs in Criminal: UK, DI Karen Renton in Liar and Jodie Shackleton in Happy Valley.

Katherine starred as the Permanent Secretary in the acclaimed 2016 drama The Night Manager, and played Jane Lowry in Strike Back a year later.

The actress is also pretty convincing in comedies, too…

She’s recently joined the cast of Bloods as Jo.

Katherine Kelly husband: Who does she play in Bloods?

Katherine Kelly plays George in the cast of Bloods series 2.

George joins the team as the ambulance station’s acting counsellor and listening ear.

She been sent to improve the depot’s poor mental health record – but she’s not exactly welcomed with open arms!

Asked about what her character brings to the paramedic team, Katherine replied: “She brings Jo (Lucy Punch) a challenge!

“She upset the status quo in the depo and is a real obstacle for Jo.

“With the rest of the paramedics, she encourages them to open up and talk.

“Her intention is to help, but a lot of the time I think the process is so alien to the paramedics, she just causes confusion.”

Who did Katherine Kelly play in Coronation Street?

Becky Granger arrived in Coronation Street back in 2006 as a troubled, light-fingered friend of factory worker Kelly Crabtree.

During her time on the Street, Becky went from gobby shoplifter, to a caring, funny Corrie icon.

Mostly due to her endearing friendship with Roy and Hayley Cropper.

Becky will always be remembered for her marriage to Steve McDonald.

The pair were desperate for kids, and even attempted to buy Becky’s nephew Max from her sister Kylie.

But Kylie ended up moving to the Street, and Max is still a fixture on the cobbles – though proving to be just as troublesome as his mum and auntie!

Why did Katherine leave Corrie?

She fell for him and his young son Billy.

When Danny got a job in Barbados, he asked Becky to go with him.

So, straight after dropping a truth bomb about Tracy huge miscarriage lie, Becky packed her bags and went to the airport.

Becky’s last words as she flew away were: “Regrets are for people stopping on the ground, we’re heading for the stars.”

And the character is still in Barbados now…

She said at the time: “It’s been one of the hardest decisions of my life.

“I have had the most blissful five years, I wouldn’t change one moment – but it feels like the time is right to say goodbye to Becky.”

Will Katherine Kelly ever return to Corrie as Becky?

Despite the character’s popularity, Katherine has ruled out ever returning to the cobbles.

In a recent interview she told Scotland’s The Herald: “That character was very much of her time, and I think, in all honesty, she would be a bitter disappointment to revisit.”

She added: “I would hate for her to be spoiled in any way, because it was such a perfect character, at a perfect time.

“Becky’s better left with a fondness.”

What will she star in next?

Other than her new role in Bloods, no further roles have been announced for Katherine as yet.

But we are sure she has plenty of exciting projects up her sleeves.

The star said in a recent press conference that she is now deliberately careful about which roles she takes on.

Katherine explained: “I’ve always been of the attitude that I would rather be a smaller part in something good than the lead in something crap, I don’t have that ego.

“For me, it’s about quality not quantity.

“I’ve turned down jobs when I just feel like I’ve just got a bit too much on.”

We do know that Katherine is taking part in the upcoming The Great Celebrity Bake Off on Channel 4 for Stand Up to Cancer.

How old is Katherine Kelly and where is she from?

She is currently 42 years of age.

The actress was born in Barnsley, South Yorkshire.

She grew up in both South Yorkshire and the USA.

Katherine has strong links with The Lamproom Theatre in Barnsley, which was established in 1998 by her Irish dad John.

She graduated from the Royal Academy of Dramatic Art in 2001.

Who is Katherine Kelly’s ex-husband?

They lived together in North London.

In 2014, she had their first child – a little girl called Orla Kelly Clark.

She has said: “I met Ryan at my best friend’s wedding in Australia.

“But he was with someone else and I’d only split up with my boyfriend of six years the week before.”

She told Daily Mail’s YOU Magazine in 2016: “We became good mates first because he was part of my friend’s circle and I’d see him whenever I was visiting her.

“Then when I went back, he was single and so was I, so it was lovely to get together romantically at last.”

Two years after meeting, Katherine married the digital analyst in a secret ceremony at the Little Church of the West in Las Vegas in 2013.

“It was awesome. I’ll never forget that moment for the rest of my life,” she said about the big day.

Why did Katherine Kelly split up from her husband?

Sadly, in 2020, the couple announced their separation.

Katherine moved back to her hometown of Barnsley with her daughters.

A spokesman told The Sun newspaper: “Katherine and Ryan have made the difficult decision to separate.

“They see it as a positive move for both of them and the separation is completely amicable.

The couple subsequently sold their property in London.

An insider said that Katherine and Ryan’s marriage didn’t end as a result of the coronavirus lockdown.

The source said: “It’s tremendously sad that it hasn’t worked out, but their decision to split wasn’t a rash one and their relationship isn’t a victim of the recent lockdown.

“They’ve thought about the future of their family long and hard and know that this is the best decision.

“They’re on great terms and constantly in touch discussing their kids.”

Is Katherine Kelly dating again? Does she have a boyfriend?

Katherine has not spoken publicly about the current state of her love life.

Being a mum of two, with a thriving career, we’d find it hard to believe she has time for dating!

How is Katherine friends with Zara and Mike Tindall?

She is childhood pals with Mike Tindall, who is married to The Queen’s granddaughter Zara Tindall.

The actress went to school in Wakefield with the former England rugby player and they lived in the same village before both moving down south.

She told You magazine in March 2020: “He was amazing at rugby and I was good at drama and we were both really dedicated…

“So there would be nights where we would be out at a club until two in the morning with everybody, but we’d be on soft drinks because he’d got a match and I’d got rehearsals the next morning.”

Katherine was a guest at Mike and Zara’s wedding in July 2011.

She is also godmother to their daughter Lena, while Mike is godfather to Katherine’s eldest daughter Orla.

Katherine told The Mirror in 2006: “I go out quite a lot with Zara and Mike and they are unbelievable fun.

“Zara is lovely, she’s really l down to earth and lively, they’re made for each other.”

Katherine Kelly is currently starring in Bloods on Sky Comedy and NOW TV.

What’s your favourite Katherine Kelly role so far? Leave us a comment on our Facebook page @EntertainmentDailyFix.