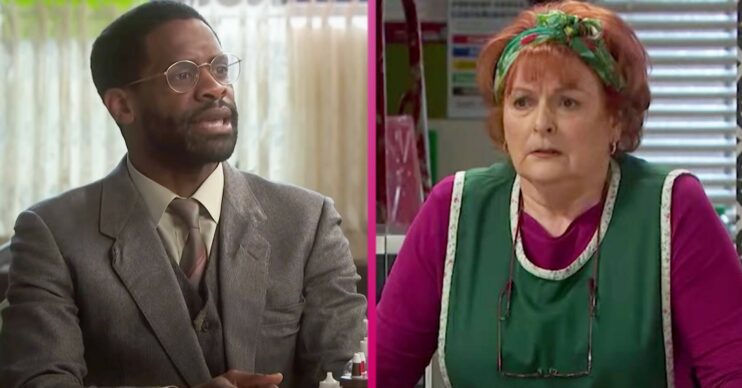 Say hello to a new Koji!

Kate & Koji, with a cast starring Brenda Blethyn and Jimmy Akingbola, first aired as the UK was sliding into the original lockdown.

The ITV sitcom did phenomenally well in the ratings – possibly because of the restrictions at the time and TV being one of the few things people could do!

Over five million viewers tuned in for the initial run of six episodes.

Two years on, Kate & Koji is back for series 2.

But there’s been a very significant cast change since series 1 with Koji recast with another actor in the role.

Read more: ‘Dizzy’ ITV viewers all have same complaint about episode 2 of The Ipcress File

Meet the new Koji, Okorie Chukwu – and find out why Jimmy Akingbola left the role.

National treasure Brenda has delighted ITV viewers for over a decade as DCI Vera Stanhope in Vera.

But her highly-acclaimed career has seen her win over audiences and critics across stage, TV and film.

But perhaps her most praised roles have come with Little Voice and Secrets & Lies where she became the toast of the awards season both times… but just missed out on an Oscar win.

Okorie takes over as Koji, a doctor seeking asylum who somehow manages to work in the cafe.

It is his most high profile role so far in his career, although he has previously appeared in War of the Worlds and My Mad Fat Diary.

Okorie said about being cast as the co-lead when appearing on This Morning: “I think I read the script and I really felt a connection with Koji. When the job was offered I did think it was an unusual way to onboard the show.

“But it was a hit show. And I thought it was an amazing comedy. I was a bit nervous but everyone was so welcoming and so warm.”

What happened to Jimmy Akingbola?

Jimmy, who played Koji in the first series, stepped away after he was cast as Geoffrey the butler in HBO’s reboot of The Fresh Prince of Bel Air.

COVID threw a spanner in the works for production of the second series of Kate & Koji. And it seems, unfortunately, that Jimmy’s schedule no longer matched up when filming was rescheduled.

But he is probably best known as his unforgettable role as Neil in The Inbetweeners TV series and films.

Blake voices Scoop in Bob the Builder, appeared in Prime Suspect 1973 and was in Doctor Who last year.

And next week he turns baker as he joins Clara Amfo, Alex Horne and Emma Willis The Great Celebrity Bake Off for SU2C.

Barbara plays Kate’s snobby rival in Kate & Koji. But she started her TV acting career in A Family at War.

She played the Milk Woman in Open All Hours in the 1980s.

And she also turned up in Inspector Morse, The Barchester Chronicles, Boon and Maigret.

Cracker fans will remember her as Judith Fitzgerald and she was Dee Chandler Tate in Chandler & Co.

She starred as Emily Forsyte in The Forsyte Saga and Mrs Mason in Hornblower.

Other roles include Mrs Jamieson in Cranford, as well as parts in Midsomer Murders, The Borgias, The Durrells and Killing Eve.

Victor plays a regular at Kate’s cafe – and the 57-year-old has been a regular on TV for almost 40 years.

The Liverpudlian actor got his telly break in Brookside in 1983.

But he became a familiar face on the box thanks to his role as Jack Boswell in Bread. He starred on the BBC One sitcom between 1986 and 1991.

Victor also had memorable supporting role as Ron in Goodnight Sweetheart in the 1990s.

He’s been a regular in Peak Practice and Trollied and has also appeared in Dalziel and Pascoe, Casualty, 2point4 Children and New Tricks.

Viewers may also recognise his face (but not his voice) from Haribo ads.

And he was most recently seen in Martin Freeman drama The Responder.

Where is Kate & Koji filmed?

Kate & Koji is set in the fictional seaside town of Seagate.

But it is actually filmed in Herne Bay in Kent.

The exterior of Kate’s cafe was formerly the premises of Frasier’s Pie and Mash Shop.

Other filming locations include the nearby pier, promenade, a local industrial estate and the outside of the Divers Arms pub.

Sadly, the pie shop closed down permanently in January of this year.

Kate & Koji was created and is written by Andy Hamilton and Guy Jenkin.

They both have extensive TV writing credits and previously worked together on Drop the Dead Donkey and Outnumbered.

Guy has also written for Life On Mars while Andy has worked on The Two Ronnies, Bob and Margaret, Alas Smith & Jones and Not the Nine O’Clock News.

Read more: Holding on ITV1: How many episodes, is it based on a book, and where is it filmed?

Andy is also known for appearing in front of the camera for the likes of Have I Got News For You and QI.

Kate & Koji airs on ITV on Wednesday March 16 from 9pm.