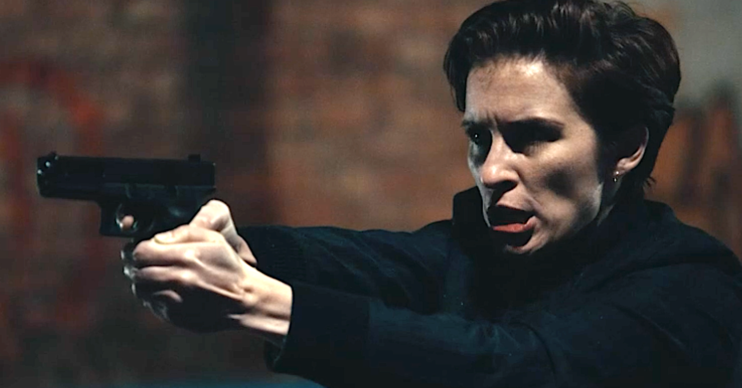 Kate in Line Of Duty episode 5: The funniest fan reactions to the shocking shoot-out with Ryan

The Line Of Duty cliffhanger with Kate and Ryan had fans on the edge of their seats last night (Sunday April 18).

And, helping viewers through all the tension, was good old social media.

And you can always count on Twitter to diffuse any situation with some well-timed and hilarious memes, and last night was no different.

But what were the best?

What happened in the Line Of Duty cliffhanger?

Before we get to the memes, let’s just run down what exactly happened at the end of episode five.

DI Kate Fleming was getting close to uncovering OCG members after her raid of the weapons warehouses.

She also knows who Ryan Pilkington is and who Jo Davidson’s blood relative is.

Because of Kate’s persistence and knowledge, the mysterious figure at the head of the OCG ordered Jo to take out Kate once and for all.

Luring her to a deserted car park, Kate and Pilkington engaged in a deadly armed stand-off, until shots were fired.

However, viewers were left not knowing what had happened to the fan favourite.

And, to help ease the tension, they took to Twitter to inject some much-needed humour into the situation.

"THERE'S BEEN SHOTS FIRED BUT BY WHO CHRIS KAMARA??!!"#LineofDuty pic.twitter.com/9eqNxKlUob

THERE’S BEEN A SHOOTING IN THE LORRY YARD BUT FOR WHO CHRIS KAMARA??

“I don’t know Jeff, has there? I thought they were going for a drink”#LineOfDuty pic.twitter.com/rFx62cbUKl

What did the Line Of Duty memes say?

Our first selections reference Sky Sports Soccer Saturday – where pundits watch and report on games in the studio, with host Jeff Stelling.

Jeff’s relationship with reporter and former pro footie star Chris Kamara is legendary, especially during the time ‘Kammy’ failed to notice a goal being scored while watching a game.

Kammy is also famed for his catchphrase: “Unbelievable, Jeff!”

And this hilarious moment was used to take the mickey out of the shoot-out on Line Of Duty.

One meme shows Kammy at a football match, with the caption: “THERE’S BEEN A SHOOTING IN THE LORRY YARD BUT FOR WHO CHRIS KAMARA??”

“I don’t know Jeff, has there? I thought they were going for a drink.”

"I once went for a drink with a girl who I thought fancied me but ended up in a shootout in a lorry yard"#LineOfDuty pic.twitter.com/exQjaIPlkj

Next, BBC One panel show Would I Lie To You was used.

Showing panellist Bob Mortimer hold up one of the cards, the caption said: “I once went for a drink with a girl who I thought fancied me but ended up in a shootout in a lorry yard.”

Where to meet: Where not to meet: pic.twitter.com/EIp0Xw5RFy

Kate’s choice to actually go to a deserted lorry yard alone was also the source of much amusement.

One Twitter user showed a picture of a pub and said: “Where to meet.”

The image of the pub was juxtaposed with a picture of a deserted alley way and said: “Where not to meet.”

Me booking tomorrow off work as I’m not sure if Kate is dead or not. #LineofDuty pic.twitter.com/RmADmhXT3h

There's only one thing I'm interested in and that's bent BBC employees who are willing to leak the remaining episodes #LineOfDuty pic.twitter.com/iyk8X8BMcd

Fans stressed after the episode

The next set of memes shows how the cliffhanger messed with people’s minds.

Some showed images of Ted Hastings flat-out and people hooked up to oxygen machines after the madness.

Another wanted to know if she should book bereavement leave at work, while another showed a picture of Ted Hastings.

Mimicking the Chief Superintendent, it said: “There’s only one thing I’m interested in and that’s bent BBC employees who are willing to leak the remaining episodes #LineOfDuty.”

Another fan zeroed in on the text Jo sent Kate to lure her to the lorry park.

In a previous conversation, Jo asked Kate to pick up an almond croissant from a coffee shop.

Read more: Line Of Duty: Is Kate dead and three other questions we need answers to

Talk about things changing in the space of a week!