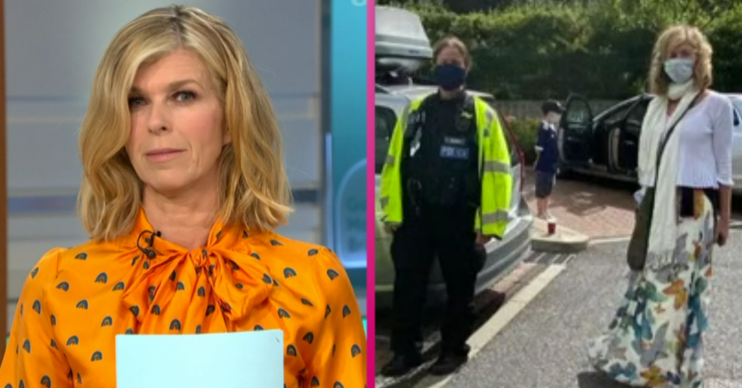 The shaken star spoke out on GMB

Kate Garraway opened up about her terrifying car accident on GMB today (July 27).

The Good Morning Britain host admitted the ordeal had taken its toll and she is now at her  limit.

Speaking to co-host Ben Shephard, Kate said: “You know people say God and the universe doesn’t send you what you can’t deal with?

“I’d just like to put a message out, I’m at my limit. I’m absolute limit now.

Read more: When is Piers Morgan back on GMB?

“And if the universe could just give me a little calm Monday, that would be good.”

Kate was driving with her two children Darcey, 13, and 10-year-old Billy at the time.

The family were on their first trip out as a family since husband Derek Draper was admitted into hospital with COVID-19 in March.

Kate revealed she had been keen to get back home to check on Derek.

Also, her parents were coming to visit for the first time since lockdown restrictions were lifted.

Recalling the terrifying moment, Kate said: “Suddenly, my tyre exploded and it’s that moment where shout think you can’t control the car.

“The. stewing went all weird, bits of rubbing flying everywhere, I don’t know if it was smoke but it looked like smoke.”

Kate did manage to stop the vehicle without any collisions – but the drama was far from over.

She continued:  “I managed to pull over but it just happened to be on the section of motorway where there wasn’t a hard shoulder.

“There was a feeder road coming off, so I was nervous about people coming in on the insider.”

As soon as she had parked, Kate called the A.

“I don’t want to diss the AA at all as I don’t know what challenges they’ve got with regards to COVID – but A, it was very hard to get through to the,” she added.

“Then when we did, it was very difficult to communicate with them – they kept saying ‘Can you get somewhere safe’ and I was like no that’s the problem!

“And then they kept saying can you go somewhere quieter. to speak and I. said no we’re on the motorway”

Eventually,  Kate was rescued by two members of the Kent Police, Liz and Mark – who she was full of praise for.

The officers managed to get the family back to safety.

Kate admitted she was “too shaken” after the car accident to drive it home and so left her key with Liz.

After sharing her traumatic ordeal, Ben told Kate: “We’re thrilled you are here and that you are safe.”