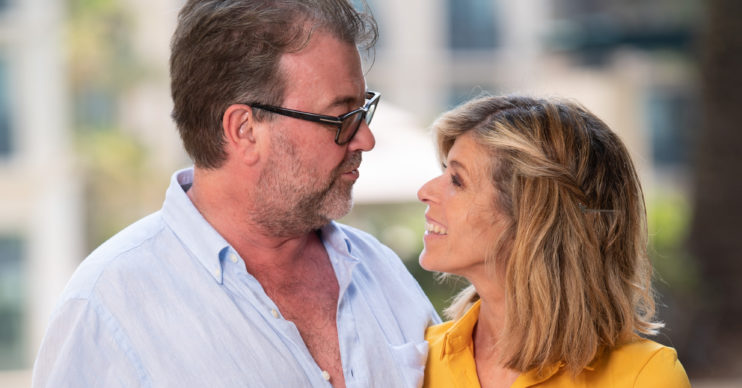 The presenter gave a newspaper interview detailing the damage that coronavirus has wreaked on the 52-year-old psychologist’s body.

“He has damage everywhere, holes in his heart, his liver is impacted, and his pancreas… well, he’s now very, very diabetic which he wasn’t before,” she told Loose Women journalist Jane Moore in The Sun.

“He’s been on kidney dialysis because his kidneys stopped functioning. And his nerves and his neurology have been affected by the virus, but the impact and the damage of that, they don’t yet know.

Kate told Good Morning Britain co-stars Ben Shephard and Ranvir Singh on Friday that Derek was put in an induced coma on April 5.

He had been admitted to intensive care at the end of March on the advice of Dr Hilary Jones, who was alerted by Derek’s breathlessness.

Doctors stopped giving him the drugs three weeks in the hope that he would regain consciousness.

That is yet to happen but Kate noted “he’s opened his eyes, so the hope is that he moves through stages of consciousness and emerges”.

On Monday’s Loose Women, Jane spoke about her encounter with Kate, who she described as going through hell.

I will never judge anybody for wanting to lead a normal life.

Jane said she had asked her ITV colleague how she felt when she saw people gathering in parks, risking catching or spreading coronavirus by failing to stick to social distancing rules.

“She said: ‘I will never judge anybody for wanting to lead a normal life,” Jane explained.

“‘But all I will say is, this virus – you don’t know where it’s going to go in your body or what it’s going to do to you. Derek had no underlying health issues.'”

Last week, Kate, 53, recalled the last words she exchanged with Derek before doctors put him under.

“He said, ‘I love you but I have to leave you’,” the mum-of-two told her TV colleagues.

“I said, ‘It’s only for three or four days, you’re gonna be fine. This is good because this is what you wanted and it will allow you to rest.

Already popular with breakfast TV viewers, Kate won the affections of many more fans last year on I’m A Celebrity… Get Me Out Of Here!

Derek and their two children, Darcey, 14, and Billy, 10, thew their full support behind her, giving TV interviews and, seeing what a lovely, close-knit, down-to-earth family they are, fans of the show warmed to them, too.

Now millions of people are rooting for Derek to recover and for them all to be reunited.