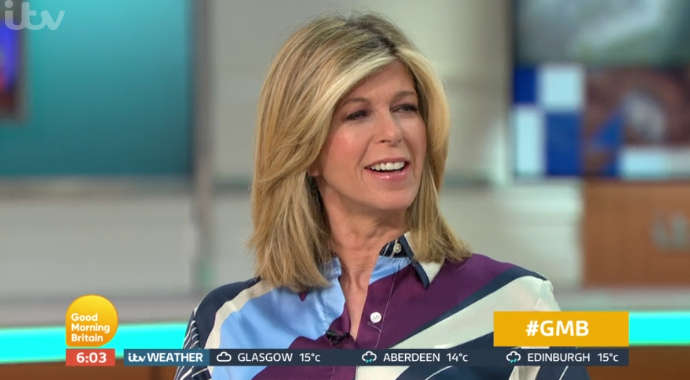 GMB’s Kate Garraway vanishes after getting locked in the loo

Kate disappeared after an ad break

Kate was presenting alongside Ben Shepherd and Susanna Reid when she disappeared following an ad break.

Ben told viewers that she must have got stuck in the toilet while they were off air.

“I think she got locked in!” Susanna added.

While Kate herself brushed it off when she finally returned, viewers at home quickly spotted the blunder, with one joking: “Kate’s had a number 2.”

“LOL Kate was late back from her wee,” a second tweeted.

Viewers said they were in hysterics over today’s show, which also saw Ben recall the time he saw his co-host topless 20 years ago.

He said: “We were working together and lived round the corner from one another, we literally were neighbours.

“I’d invited myself over for a cup of tea, I was cycling everywhere at the time and I got there early.”

Ben explained that Kate lived in the basement unit and had railings just outside her window.

“I was chaining my bike up… ooh I’m getting shivers just thinking about it.

“It was about lunchtime and Kate had obviously gone home and had a sleep as we’d been up early and then suddenly someone walked into the kitchen and I looked up, and it was Kate.

“She was topless and I kind of stopped and I was transfixed.”

Susanna said he should have just looked away, to which Ben replied: “No what I did was, I didn’t want to move as I thought ‘if I move she’ll notice me and that’ll be really embarrassing’.

“So I undid my chain and I slowly just walked away like I’d never seen a thing and cycled off in, like, a hot sweat.”

Kate added: “The thing is I rang him and said ‘I thought you were coming over?’ and he just said ‘Oh I got a bit tied up’.”

Kate then revealed the moment he told her – 20 years later.

“I was thinking ‘Oh my God, Oh my God’ and when he said ‘I’ve seen you naked’ I thought, ‘When?’ thinking, ‘Oh my God because these days it’s really bad’,” the GMB star said.